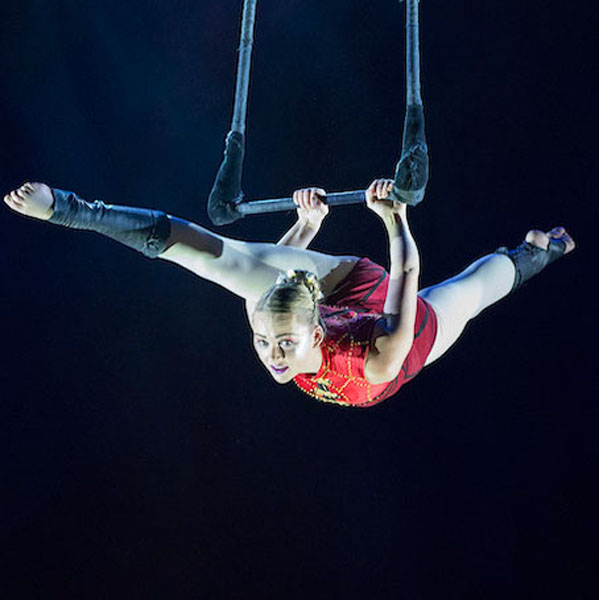 Once Upon A Circus begins as all fairy tales do; once upon a time, a young man named Trompie snuck into the Zip Zap tent.

We are compelled to watch, spellbound, as Trompie guides us through the cavernous space where the air seems to be alive with magic.

Unable to peel my eyes from the screen, I spent most of the show muttering, ‘no ways’ or gasping in unadulterated awe. As someone who struggles with the most basic of ball skills, Jason ‘Malanga’ Barnard’s juggling left me speechless. Phelelani ‘Remember’ Ndakrokra’s incredibly moving aerial acrobatics gave me goosebumps, and the controlled grace of Saskia ‘Saseekia’ van Rensburg’s aerial hoop performance belied her incredible strength. These are just a few of the breath-taking spectacles. The artists emanate such raw, captivating power that each performance feels profoundly intimate.

The music accompanying each act is cleverly curated; the audience’s emotions move with the music as we are taken on a rollercoaster of joy, shock and awe. Our hearts thump as dizzying heights are reached by the acrobats and smiles escape our lips during energetic group dances. Trompie’s impish and clown-like character beckons audiences further into his magical world, which seems to be occupied by other-worldly beings.

As if the performances themselves aren’t enough to make a grown woman cry, Zip Zap gives audiences a glimpse behind the scenes. Trapeze artists Brent van Rensburg and Laurence Esteve started Zip Zap during the infancy of the rainbow nation, determined to make a difference. Starting with a trapeze swing on a tree and a tattered box of costumes, Zip Zap grew to nurture the talents of children from all walks of life. Trompie himself was one such child; he was living on the streets before he found a home with Zip Zap, where he came alive as an artist.

It turns out that running away to the circus isn’t such a bad idea, after all. Once Upon A Circus is a uniquely South African fairy tale that reveals the magic in our nation.

Once Upon a Circus is on the National Arts Festival vFringe programme, you can watch it here until 31 July.

One thought on “Once Upon a Circus: It’s a kind of magic”