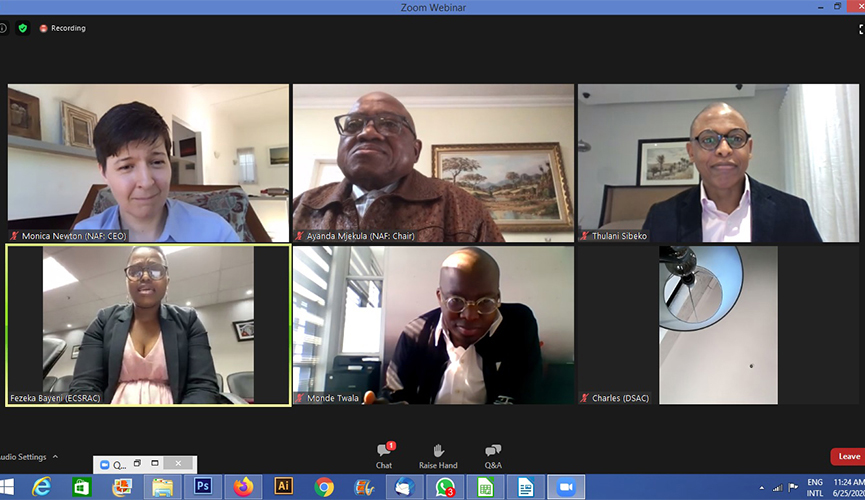 Who even remembers Netflix, Showmax, Apple TV? Whatever. Geezuz! What a ride. And we don’t even have to drive home. Normally we’d be hitting the highways back to our cities with our collapsing ponzi scheme of hangovers in tow. This year NAF took the pilgrimage to us, dropping into our room like mother Krismis in July.

And now, like those weirdos who hang around Makhanda for weeks after fest ends and couch surf student digs and stir kak in the shebeens and eventually run out of options before finally leaving town and letting everyone get on with their lives, NAF is still here. Still here to crack a bottle of wine, scarf a curry, maak a pipe eksê. The Main is hanging out with us until the middle of the month and its buddy, Fringe, is only packing up on 31 July. But unlike those dodgy hangers-on who went by names like ‘Zooty’ or ‘Rasta’, NAF is welcome to stay.

These artists, you gotta watch out for them, they’ll unskarrel your brain, make you think straight. See shit you didn’t think you’d seen, were thinking maybe if you didn’t look would disappear.

Ay yay ya! And we were worried virtual fest was gonna be videos of plays. No, no no no no. You wanna talk cross-disciplinary? You wanna talk kicking down some gates, or just vaulting over them. Scrambling fences if needs be. The field just bust wide open. Through a screen. All through a screen. In the words of Bailey’s Banquo and Macbeth: Weird shit. It’s never going to be the same again.

It almost didn’t make it here, virtual fest. They’d been hammering away in the digital workshop for three months since our Prez shut us behind our front doors, desperately, madly, wiring it all together. Then on 25 June it started and belched into life, with a few cylinders not yet firing. It coughed and spluttered and got on the road, a couple of pit stops along the way.

So the Ford Cortina bakkie award goes to the vNAF website. Held together with bloudraad. You have to open the hood and bang about with a spanner every few k’s and then it eventually roars along with a loose exhaust pipe. Well done Nicci and team. Techies, in all mediums, rule.

The catch-me-if-you can jack-in-the-box award goes to J.Bobs. Not seen pha vNAF until the last day of the programme, and then giving us a hoezit! and turning theatre upside down and inside out.

The Department of Sports, Arts and Culture gets the upside-down lamp award, also known as the BBN award. Be back now, or perhaps never, for walking out the opening presser leaving their webcam pointing at the ceiling. Thanks deputy director, we know you care.

The bean counting award, also known as the blinker award, goes to the media who all but ignored the biggest arts festival on the continent, even though they did not have to shell out to send a journo to Makhanda. Instead, those who were at least aware of what was happening used copy from yours truly but the suits couldn’t have been bothered to scrape the budget barrel to hand over to their editors to make a token payment for it. Did I hear the word exploitation from the back? It was up to NAF to find something in the books to compensate the arts writers. Which is also why NAF gets the golden appreciation award.

The left-the-building award goes to Cue, which ties in with the missed opportunity award for Rhodes (UCKR) who don’t, or can’t, or don’t have the resources, to develop what could be a world-class arts writing programme on the back of the annual festival in their backyard.

More positively, the back-to-the-future-tapping-the-source award goes to Nyege Nyege. Also known as the ytes-can-dream award for giving us a soundtrack to write to and rooting us in our continent and revealing where Brett Bailey gets his inspiration.

This is the end, not quite. You still have ‘til Thursday next week to watch what’s on the vNAF programme, and the vFringe is there until month end. We’re still hanging on, and probably won’t be able to stop ourselves writing a few more reviews.

Of course, the forward-thinking award, also known as the grab-an-opportunity-rather-than-bewailing-your-fate award goes to all the artists, especially those on the vFringe, who believed this could happen and put work on the programme.

Love you, take care, thank you for reading.