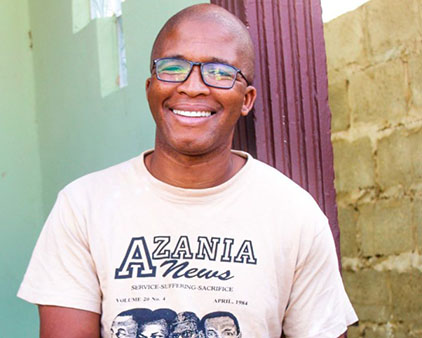 It was while a schoolboy in KwaNobuhle on the edge of Uitenhage that Ayanda Billie discovered writing as a means to express himself, and has recorded the chaos, struggle and joy in this township, with his haunting, gritty poems having been published in a recent collection, Kwa Nobuhle Overcast, which came out in 2018.

His work takes and unflinching look at a community in which people no longer do anything for themselves. He despairs at the people who were born and grew up in KwaNobuhle, who no longer own the businesses and enterprises in their hometown, now run by immigrants and refugees. The sense of community and belonging has disappeared; Whereas once people greeted each other by name, now everyone is “my friend”, although there is no friendship.

This is particularly apparent in his headline poem, KwaNobuhle Overcast, in which the poet walks along the township streets noting the crumbling shops and failing businesses owned by the people born there.

“The Somalians took all the shops in our streets,” mourns Billie, which begs the question: why have people allowed themselves to be overtaken, to lose their own sense of place?

When I was a boy the township shops were owned by people who were born and grew up in the township, but people from Somalia, Pakistan, and China have outcompeted them. Is this the fault of the local municipalities, of corrupt governance and broken promises? The politicians talk of assisting entrepreneurs and local businesses, but people who have fled other lands manage to succeed on new ground while those who were born there wither and die, forced into a corner, pushed out space, no longer able to feed themselves.

“Chinese squash the children in the corner, now it is them who put the bread and salt in your kitchen,” observes Billie.

What lies behind the fact our sisters now work as security guards for Chinese-owned shops, being paid below minimum wage and no benefits at all? This is not about railing against immigrants and refugees but about people regaining their sense of pride and place and self-respect.

Khumbulekhaya is particularly close to home, highlighting the issue of young men and women leaving their families to seek their fortune elsewhere and forgetting those they leave behind. This may provide some answer to the questions raised in KwaNobuhle.

“Khumbula ekhaya usenamandla” (remember your home while you still have your power), urges Billie in this Xhosa poem which mourns the exodus of able adults to the cities where they spend their health and fortune, only to return home when they are old or sick, sucking succour from the place and people they abandoned.

There is hardly a home in KwaNobuhle, or Rhini, where I live, or any township across the Eastern Cape which does not have a son or daughter who has left to expend their energy elsewhere. Fathers who abandon their sons. Sons who need them in order to undergo traditional circumcision rites to become men. Yet when those men, those absent fathers, lose their health or their fortune, they return home, expecting to be nursed in the place they spurned.

In his 30-minute performance of poems in English and Xhosa on the National Arts Festival, Billie delves into the socio-economic ills that beset his own community, which mirrors thousands of others abandoned by a corrupted government, and exposes the soul of a bereft people whose lives wither in barren soil.

Poems in Times of Distress is on the National Arts Festival programme until 16 July. Watch it here.