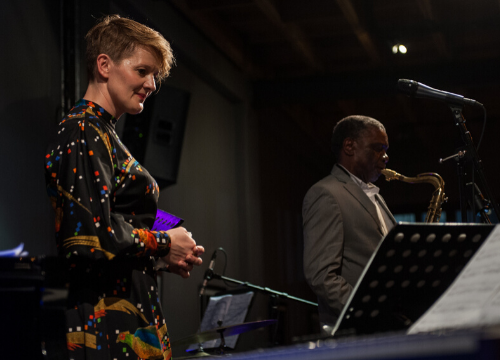 Jazz vocalist Ziza Muftic is a masterful songstylist. A South African raised in Croatia, Muftic embodies a triple heritage vortex of energy. It is made up of Eastern European folk tune sensibilities, touched by American and strengthened by South African jazz styles.

Muftic opens her performance at the Virtual National Arts Festival with a masterful vocalese arrangement  of the late great Bheki Mseleku’s composition, Homeboyz. The tune first appeared in its original instrumental form on Mseleku’s 1993 record, Timelessness.

It, alongside her the other vocalese offering – a treatment of Sydney Mnisi’s Kwela-Gontsana – shore up Muftic as a songstylist with serious chops. Other treats are a selection of songs from her records, Silver Moonbeams (2015) and Shining Hour (2019).

Her band is made up of superb players too. These include the incredibly talented reedsman, Mnisi, whose power as a soloist is well invested in the performance. The lyricism and force of his blowing gives a sharp masculine ballast to Muftic’s elegant boldness. The rhythm section comprises Roland Moses on piano, Peter Sklair on bass and Peter Auret on drums. They are masterful monsters too. They oscillate between empathetic enablers of Muftic and Mnisi’s melodic leaders, and impeccable improvisers in their own right.

Straight ahead jazz fans will find this gig a rare treat. Mostly because of the masterful modulation with which Muftic handles every chord, note and lyric. There’s a sophisticated maturity that underscores every chart the band delivers. Jazz music always thrives on the depth and diversity the ingredients each performance and every player brings to the band stand. Muftic presides over a band with deep abilities and diverse histories. The result is that their shared performance is made special.