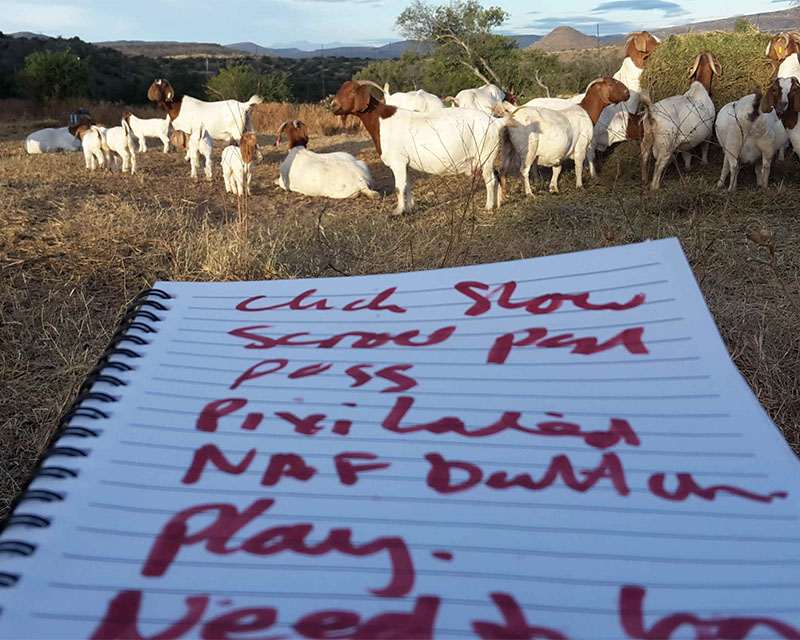 Here on the boer goat outpost, as fiesty matriarchs jostle on hindies for tasty lucerne tips at the top of the bale, I listen to the rasping, drunken rantings of impeached American patriarch Richard Nixon.

He is penning his 1974 resignation speech and is played by the extraordinary actor Steven Berkoff.

It is all happening here in the Karoo foothills below Toorberg where nobody has ever, or probably will ever watch a Berkoff piece.

Earlier in the day I listen to former Nusas activist, attorney Mike Evans on SAfm justifying why he is representing the British American Tobacco corporation in the second legal attack on Mrs NDZ’s non-smoking bastion.

It must be dark serendipity that the actor and the Cape Town lawyer’s names pop up here at the goat station.

After a Steven Cohen performance in the Rhodes theatre where the artist made use of a video of his sphincter to pillory apartheid symbols, Mike muttered that this was “beyond the pale”.

Mike, son of a bishop, lawyers on about the regulation being an autocratic assault on the constitutional right to personal freedoms, and I agree.

But representing BAT? Defending the cancerous tobacco imperialists? Nicotine pushers? I am torn.

But I hear the comments of a colleague who draws pleasure and inspiration from a ciggie around the corner at the office along with all the other Sad Sacks who used to gather there to commit self harm. Then covid came and they went home leaving the newsroom empty.

Let’s not be pious. Addiction is not the preserve of rookers. Every time we switch on our fossil fuel-burning engines, or flick an Eskom switch, or pick a plastic smothered veggie from the supermarket fridge, we manifest our own addictions.

By now, it has sunk in that this social behaviour is bad for the atmosphere’s lungs, yet do I stop mounting Delores, (my motorcycle for the uninformed), with her terrible smoking habit, the CO2 emissions belching from her pipe?

As the journalist Ben Maclennan once wrote in a 70s sticker: “We are all involved”.

Back to the old goats. I am slumped in a camp chair in the midst of the nursery. Kidds are frolicking most sweetly but my eye is on the blue-hilled horizon whereover my baby lies, a Vodacom relay tower.

Signal! I must have signal! And it arrives, three bars, and I am back in the amazing virtual National Arts Festival!

As a bittereinde I  believe in the intimate, raw, mind-altering power of live performance. You get off your lazy, convenience-ravaged  ass and go out and show up before an artist who has done far more than you to be there. And you all give it!

Then covid too arrived. And the art died.

I was so sceptical about the vNAF as a quick gooi-together, a placebo,  a creative fiscal dump.

Slumped here on the outers planting carrot shoots, winter rattling the zinc and with a crazy tomcat hanging on my festival coattail, I had an epiphany.

I was suddenly only too excited to nurture a taproot of another culture, place and time.

And, as you know, friends who stick with you regardless of what a  bumptious fart you can be, are the ones you turn to.

Kretz, my old pard in artswriting quickly gets me back into the fest fold. I register over four days of digital fettling. I am patient as we work to set up a lifeline back to the old hearth.

I have lots of  time. Fest too: the works are available online until the end of the month.

I am halfway through Berkoff’s masterpiece when it buffers and hangs. A kidd sneaks up from behind and biffs me in the back. Its mother, horns down, is peering at me and advancing.

Time to run for cover. But I am in!

VNAF in the high Karoo, what a jol!

In the initial posting of this article there was a bit of a fudge over Steven Berkoff and Steven Cohen, which is part of what happens when writing on a cellphone with two bars of signal and dropping while getting biffed by goats. It has been amended.