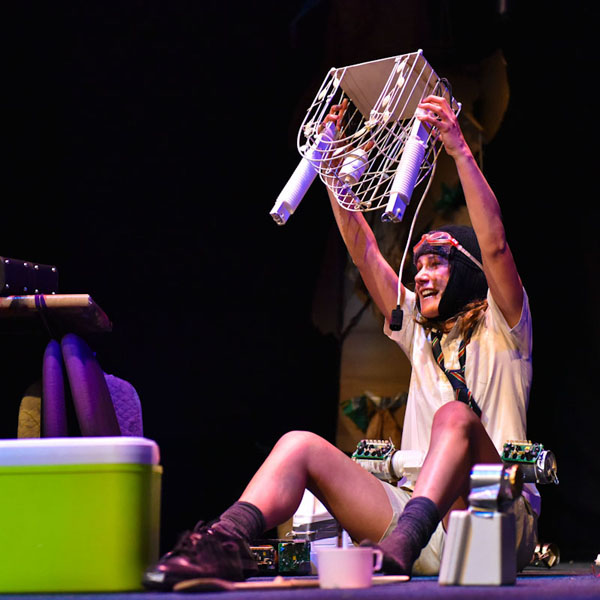 We are invited into the intimate workings of a little boy’s imagination in Michael Taylor-Broderick’s ode to the people and things society deems damaged.

The King of Broken Things asks to reflect on our own brokenness. We are reassured by a boy who, although broken himself, believes anything can be fixed. Then, we are urged to take pride in our cracks and to delight in our faults.

The sets seems to be a mess. A jumble of cardboard boxes, tin cans and hopscotch outlines in chalk aren’t your usual source of inspiration, but for the main character (played by Cara Roberts) it is a refuge from bullies and a workshop for wonder. Roberts’ little boy teaches us the remarkable potential of broken things. By the end of the performance, we are familiar with the workings of emotion calculators, upside-down bird cages and magic caps.

Roberts gives a stellar performance as a boy whose absent father leaves him with big dreams and a broken heart. She tenderly encapsulates the blind faith and anguished confusion of a fatherless child. The boy and his father were the original kings of broken things, before his father left and his mother retreated to the kitchen with her tears. Hands shyly twisted together, the boy searches for our approval as he presents us with his treasured inventions. Parental instincts take over; we feel we ought to comfort this child, to wonder at his creations in place of his father.

The boy whispers into his father’s cap, “imagine, dream, believe” before placing it on his head. Taylor-Broderick has placed the same magic cap on us; we are inspired by the convictions of a boy who was taught by his absent father to imagine, dream and believe. The child’s favourite kind of broken is when it needs other broken things to survive – is that not the heart of humanity?