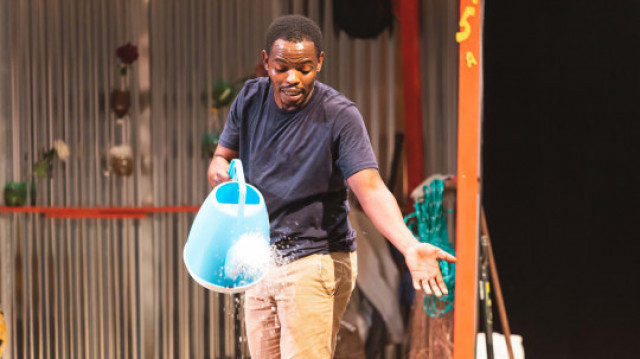 When water meets soil, the earth softens. Too much water, and the soil is flooded. Too little, it becomes dessicated. Water, too, needs the soil in order give life.

As Metsi begins, the sound of water ripples through the scene. The water feels near and yet far, representing both our needs and our fears. The choreography is strong, clear, and evocative. The performers take their time and listen to one another, it feels like watching multiples of the same character. When they stand back-to-back in a straight line, their synergy is soothing. They are an impeccable ensemble, flowing with united breath, altogether swaying from side to side to the sound of a ticking clock. Tick, tock, tick, tock, they softly beat the time. They are within time and not of time.

In this piece, time moves quickly and yet the work feels wonderfully paced. It is grounded, but the earth is malleable.

The stage is covered in sand. There is a distinct patch of garden where flowers grow outside a shining shack. They are plucked by the gardener, their dying symbolic of the death of beauty. Beautiful moments, beautiful people live and die. Flowers, like human beings, have a lifespan.

In Metsi, time underscores our greatest fear: death. But as the water drips and flows through the ticking of time, we learn this fear of death is also a fear of life, preventing our full blooming.

The sands of time are sifted as days go by, only to be picked up again for another day. And so, life goes on. Metsi is also, partly, a love story, but one that goes beyond girl-meets-boy.

Performed by a powerful quartet whose acting is as strong as their singing, Metsi resonates in its choreographic innovations. The movement is solid. It is as though each of the four knows exactly what is felt in each moment. The pairs mirror one another. This device provides layers of aesthetic riches. The characters Juliet and Motswahole, performed by Balindile KaNgcobo and Abongile Matyutyu, perform the characters with ease born from the knowledge they are in service to a greater story, even if Matyutyu is a bit forceful in his monologue to us, the audience on the other side of the lens.

Writer and director Hannah van Tonder has the pair surrounded by the physical forces of nature trying to help Juliet and Motswahole grow beyond their childhood difficulties. Juliet must learn that she is of water and nurture her heart as much as her sharp mind. Motswahole must learn to root himself into the ground by accepting his Sotho heritage as well as the shifting sands of his multilingual township identity.

The pair surrounding the protagonists are more than supporting roles. They embody Juliet and Motswahole in the elements. Thobani Nzuza and Thulisile Binda perform the rain and winds through excitingly simple use of simple objects: stone, enamel basin, rope. It is an entirely cohesive performance of a theatrical world understood as an ecosystem. The form is a breath of air.

In Metsi, the tragedies of nature are also healed by nature’s storms. Ultimately, life is fought for and won by acts of courage. Courage to heal becomes seed for the birth of a new world. Life is lived, no matter how long or short its span. Like water, people flow through time.

Metsi was performed at the virtual National Arts Festival from July 19 -22.