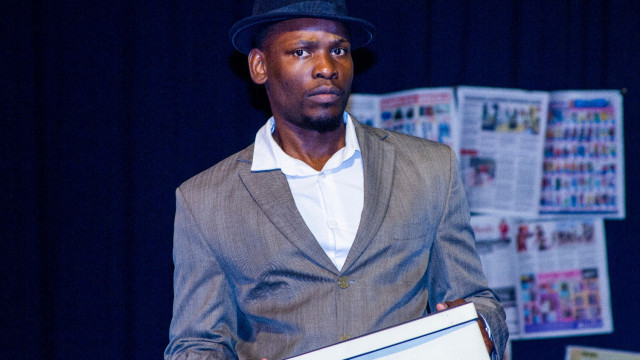 Azania, the name given to South Africa black liberation movements, holds emotional gravity. In this play by the same name, it is also the name of a 14-year-old daughter gone missing amidst the turmoil of apartheid, as writer, director, and actor Xola Mziwakhe presents an epic story of a man named Buntu Africa.

The characters’ names indicate this is a story of South Africa, and Azania is one of the strongest community theatre productions on the Fringe at the National Arts Festival this year.

In this music-meets-storytelling production, Hloniphani Mthethwa strums the pain and joys of the father as he lives a richly textured life from apartheid to democracy. In Maskandi guitar riffs and tremulous voice, Mthethwa, who appears nervous at the start, becomes as essential as a heartbeat to the body of the fictional character Buntu Africa.

With his symbolic name, Buntu struggles to retain his humanity when he learns how his daughter suffered at the hands of his white boss. He fights with himself as much as the white boss when he finds his daughter’s letter stating why she has run away. The story runs through to 1994 when Buntu votes for democracy and then attempts to find his child. But nothing is as straightforward as it seems, and waiting becomes a major theme within the narrative.

Azania is written with an ear for history and a soft touch to politics. It is a redemptive story, and music smooths its edges, as integrated into the storytelling as the words and movements of the actor. But the strong storytelling is undermined by the tightness of the performance in the space, by the shoddy backdrop of dripping newspaper pieces haphazardly stuck to the wall and curtain, embarrassingly falling to the floor every now and again.

It is elements such as these that reveal the importance of a director, admittedly a struggle within the frugality of community theatre, but Azania has such potential that it would be remiss for the work to continue to tour without continuing to grow.

Azania is available to view on the National Arts Festival Fringe programme.