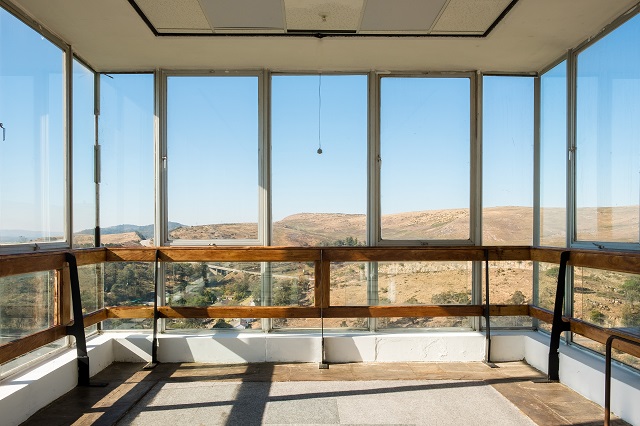 It’s just after 8pm and I’m sitting at my desk in Johannesburg, although I find myself looking through the windows of the 1820 Settlers Monument and out towards the hills of Makhanda.

It’s nighttime there, too, and I can see rows of streetlights and the occasional pair of headlights blinking in the distance. I’m seeing all of this in real time, as if I’ve tapped into the building’s CCTV network. The room that holds my vision is still and unadorned, but there are recorded voices – two of them – and they are speaking in measured tones. I turn the volume up, and eavesdrop.

“Blessings on the healers.”
I catch fragments, whispers.
“And those who entered here.”

There is activity outside of the voices, too – the sound of wind, the drone of cars passing by below. The movement of the town, the brick-and-mortar howl of the building. Or am I just imagining this?

At 8am the following day, I visit the webpage again. It’s morning in Makhanda. Harsh, white light pours in from every corner of the room. If I was quicker, I could have watched the Eastern Cape sun rise in real-time, but I wasn’t, so I skip back an hour and a half and watch it break over the hills. The voices have been talking through the night.

Video and audio. Voice and land. Monument and history. In the simplest sense, this is what makes up James Webb’s Nothing here does not hear you. The work, a site-specific installation shown as a 24 hour live-stream, makes use of the space currently known as the 1820 Settler’s Monument as a site of investigation, healing, cleansing, and listening.

To do this, Webb invited academics, traditional healers, building staff, and political activists – Xolile Madinda and Ayanda Kota are just two of the well-known Makhanda-based participants – to walk through the building and speak to their experiences of the space. All of them, explains Webb in the work’s framing text, spoke to some kind of blockage or obstacle and how the Monument needed to be opened up, picked apart, and built up into many monuments. He then shared these reflections with a writer who reworked them into a series of texts designed to function as blessings when spoken.

The installation doesn’t take place across the whole building. It occupies a small, windowed passage on the exterior of the Monument known as ‘The Bridge’ and which Webb refers to neatly as an “architectural folly”. The windows serve as a means of taking in and reflecting on the landscape, but they also double up as speakers – well-placed transducers transform them into eerily resonant panes, proselytising through the day and into the night.

The work is incredibly engaging, despite the distance. Webb’s ability to grapple with the intangible and the affect-laden, primarily through the medium of sound and how it permeates and pulses through the world around us, is profound.

He’s also worked with the Monument as a site before, most recently in 2018 through a simple installation at the entrance of the Monument that formed part of There is a Light That Never Goes Out,a series of site-specific neon signs translated into selected languages.

To make sense of a structure such as the Monument is no easy task. It’s a charged space, certainly, but it’s also a multifaceted one. Perched on a hill overlooking the shallow valley of Makhanda, it’s where the National Arts Festival has its headquarters, it’s the site of university inductions and graduations, and it houses restaurants, galleries, concert halls, cinema spaces, basement theatres and more inside its labyrinthine walls.

It also has an odd track record of reconciling its identity with the activities it holds. In South Africa’s apartheid era, the Monument basement was home to a great deal of protest theatre. Then, in 1994 it was gutted by a fire. In 2015, the city’s Foundation Council passed a resolution, minuted as follows: “It was AGREED to: Change the name of the building which is presently not in sync with the activities which take place in the building…”. In 2019, while artists such as Berni Searle and Thania Petersen installed outdoor works speaking back to the presence and history of the building, part of the roof blew off and crashed down onto the Sundowner Concert stage (fortunately, no one was harmed) during a festival press briefing. Once the dust had settled, the running joke was that the art was working a little too well that year.

Webb’s work does not destabilise the foundations of the Monument of course, but it does rattle and reorientate the building in shrewd, poetic, and symbolic ways. If history is the stubborn bedrock from which his work emerges, then sound and language are the intangible, yet enduring forms it assumes.

In Nothing Here Does Not Hear You, he is something of a sonic draughtsman, employing these simple tools to put forward new designs for a building that’s steeped in history and tension.

6pm now. I’m watching the light leave the sky, traces of it still in the room, drenching everything in a soft honey-glow. Outside, the khaki greens and yellows of the hillside, the slow crawl of cars and trucks moving in and out of the city. The blessings are spoken intermittently, working away at the stillness, the unease, the heavy weight of time.

“May every corner be a stage.”
“May you hear the questions asked by the walls.”

Nothing here does not hear you is available for viewing on the National Arts Festival website.