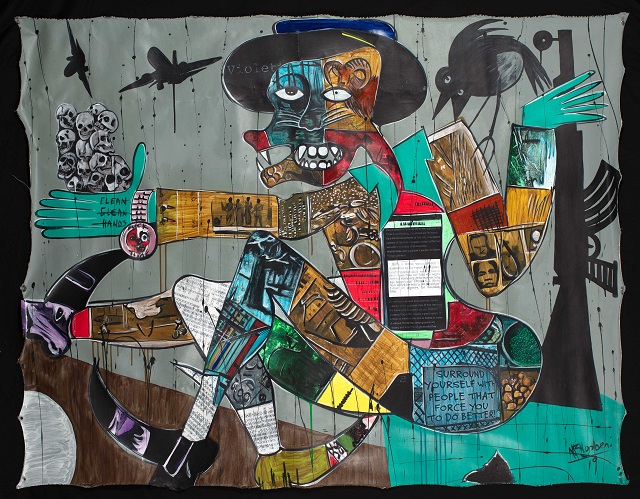 It’s always a little eerie when works of art do that thing they so often do. You know, that prophetic thing where they age and endure and still manage to speak to present day events with sharp, shimmering clarity?

The works in painter, sculptor and sometimes-performer Blessing Ngobeni’s Chaotic Pleasure are not old, exactly, but they’re not brand-new, either. Created in the periods before and after his 2020 Standard Bank Young Artist Award win, they were exhibited as part of last year’s virtual festival.

This year, a small selection of the paintings returns to the vNAF, exhibited as a virtual exhibition and driving home a pertinent point about the contemporary realities of power and discontent.

Animals, human forms, text, flailing limbs, media clippings, and more occupy the frames. They dance and riot around the room in a striking display of colour and seeming incoherence.

Titles such as ‘Ghost Leadership’, ‘Carelessness Leadership’ and ‘Politician yet born puppet’ strike a chord with the ongoing unrest and general disillusionment with governance in the country. A trio of works rendered in black & grey (and a touch of blue) carry abstract cubist figures and a fragment from a newspaper billboard reading ‘Fidel Castro’. Each from a series of works titled ‘Fidel’s Vision’ the works breach the bristling borders of South Africa and find resonance with the current protests taking place in Cuba over food scarcity, medicine shortages, and economic woes.

The chaos in Ngobeni’s work is close to home, but what about the pleasure? In June last year, when Ngobeni was getting ready to debut Chaotic Pleasure, I rang him up for a chat about the show. What’s the story behind the title, I asked?

“It’s everything,” he said through the phone. “Danger and excitement. It’s the representatives of the people. There’s the excitement of being elected and then there is the failure of pulling off what you are elected to do. There is pleasure and then there is chaos – the rioting, the protests about the failure to deliver. It’s the coloniser when he walked into Africa. He did not think about the people living there, he got too excited and took over without concern for those people. A lot of things were destroyed when that happened – things taken away. It’s the pleasure of that excitement and the subsequent chaos of everyone wanting their portion – their land back. It’s the blunt truth and the blunt questions that are not yet answered.”

There are a lot of blunt truths in Ngobeni’s work. A lot of keen observations of power and history, too. If you’re looking for a brief escape from the world around you, it’s probably ill-advised to visit Ngobeni’s show. But if you’re looking for another way to make sense of it all, to glean some kind of insight that’s not channeled through a talking head or a haphazard thread on the internet, Chaotic Pleasure is challenging, but necessary viewing.