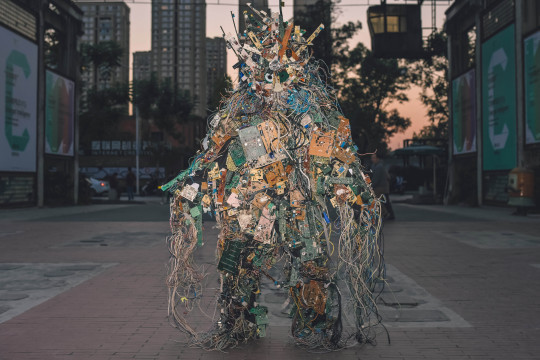 You are reading this on your smart device. These words, published online thanks to the World Wide Web. The letters appear here courtesy of my Lenovo laptop.

We’re connected by the 1s and 0s that make it possible that the keys I tap in my here and now, make legible sentences for you to consume in your ‘right here’, ‘right now’.

It’s tough not to be enamoured by technological advancement. The mind’s capacity to create and innovate, seemingly endlessly, is something my simple grey cells kinda try to compute but I remain a simple spectator and appreciator in the field of creativity.

It’s the creative brain belonging to Francois Knoetze which has given us Core Dump this year on at the virtual National Arts Festival. His four-part video series picks apart the relationship between humans and ‘our’ tech. But this is no basic “tech is good, tech is bad” story. Past and present are carefully interwoven. Layer upon layer, human experiences and stories are intertwined with incisive illumination into our dependence on the machines which pervasively occupy everyday modern life.

Let me declare now, mine is a love-hate relationship with this future-tech world we live in. So useful, so convenient, so mindbogglingly incredible to witness what human endeavour has brought forth. But if you count yourself amongst those known as conscious consumers… you’re aware of the true costs beyond the hefty price tag of that pristinely perfect product in your pocket.

Shiny stuff. We’re like moths to the flame. Deer in the headlights. Entranced by the bedazzled goods that gleam with the surety of a better life.

As with the man on the street we meet in Core Dump’s ‘Kinshasa’ part of the film.

We’re earlier told of the legend of people being turned into pigs. When cars arrived in the colonised Belgian Congo, driven by white colonisers, it was said that black people would be turned into pigs if caught in the headlights. We may read here the need to beware the glare of headlights at night to avoid being run over. But the cautionary tale reaches further.

Melding legend and history with current life, Knoetze’s subtle commentary seeps through the imagery we witness. The dazzle is dangerous. Our man on the street spends his time staring into the light from his cell phone. Caught in the glow of progress, he begins to transform and becomes a pig-like creature. All there is left is to continue consuming.

More. Want more. Want the best. Work hard and get what you want. That’s ambition and that’s a good thing, right?

Core Dump’s four videos can be watched in any order. ‘Shenzhen’, PRC. ‘Dakar’, Senegal. ‘Kinshasa’, DRC. ‘New York’, USA. It is all interconnected. In the ‘Shenzhen’ portion of the film, we learn of the Chinese underwater cable construction project along the Congo River built to connect the cities of Kinshasa and Brazzaville (in the Rep. of Congo). Over in the ‘New York’ film, we witness the loading up and shipping off of a mountainous load of e-waste; destination Dakar.

Two African cities. A metropolis from the East. And one from the West. There is significance in these choices.

Historical footage and images and sound bites pop up throughout each film, laying out the road map where we can figure out the global connections between these cities. And along the historical paths, moments from the archive serve as foreboding reminders… what once was, and what should never be again.

Flashes of a history, the exploitation of Africa’s resources, violent oppression, and dehumanisation in the name of progress… are interspersed with more recent news footage of the need for suicide nets around skyscraper factories in China, or the impending release of Apple’s first Macintosh, or the latest tech development ready for the US Army’s use in combat.

The technology changes and advances. Humanity? Under different guises, exploitation persists, and greed remains the great motivator. Are we not learning from the past? Do we want to?

Knoetze’s use of collaged video, and his method of sending out fragmented strands of storylines and thematic threads, aids perfectly in a reading of the work. The four videos are separate but we need to experience them as interconnected, to weave the strands and threads together in order to visualise and realise the full tapestry. Reflected back to us, is how all of what we consume daily in mass media, in advertising, and entertainment too, overlaps and plays an insidious part in the global capitalist machine. Shew! Everything is a tool to be used, very much including us of course.

“Many have turned their thinking over to the machines” says our hapless android-creature in Dakar. He has transformed himself, accepted a state of being as an object. His days are a continuous play and interplay of historical and current newsfeeds, a cycle of information he obsessively consumes. This is the endless scroll so many of us know well.

Like Ariadne’s golden thread, mystical stories and science-fiction and folklore are woven into each film of Core Dump, and so we are tethered to storylines to guide us through the work.

Not that they’re comforting, mind you. In Shenzhen, the greed monster cannot be stopped, and there is no redemption, no rescue by the safety nets. In Dakar, the sad android-creature consciously alters itself; new chips and circuitry are gouged into the remaining bits of flesh, leaving the tools of “progress” dripping with blood. In Kinshasa, wealthy white pigs seated at the dinner table gorge themselves on the mineral spoils provided by the violent exploitation of the Congolese people. And in New York, the two discombobulated half-machine-half-mannequins learn about disposability, theirs that is.

We were once taught: “waste not, want not”. But the global ‘we’ has been wasting a crapload, boatloads. Loads of boats filled with the waste of appliances, cell phones, TVs, PCs, no longer wanted. Out with the old. Just dump it out of sight. Update. Upgrade. Without the latest iPhone in hand, how would anyone know you’re successfully wealthy?

It’s nice, all these nice things. Modern conveniences and the steady step of machination is what has allowed us to have this virtual National Arts Festival, after all. That is what has allowed me (and we) to be seated wherever we are in the world, and experience Core Dump. It’s what allowed Knoetze and a fantastic global team to create Core Dump in the first place. Form meets content and intricately they inform each other.

The questions Core Dump raises are important. We can’t rewind. We’re here now and unless a major sci-fi-blockbuster inspired event occurs and the global network is disconnected forever (we can dream!)… the capitalist consumption machine will keep on whirring and building and developing and speeding up.

You don’t get something for nothing! Capitalism has taught us this well. So, what is the price we’ll pay?

In the ‘Shenzhen’ film, the price of the sins of the parent, is weightily carried by the child. The crazy wasteful march of progress of the generations before us have led us to this point. We have inherited this world system but we’re short on time for debates and discussion. What’s it going to be? Life as we know it? Or, simply, life at all?

For the full credits of the film series, visit here.

Image is from the Shenzhen film (supplied).