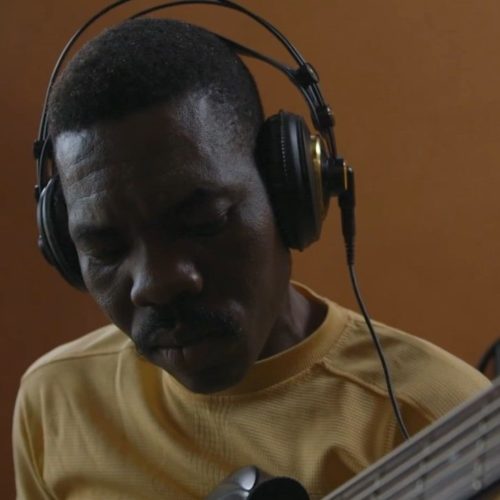 When Nthato Mokgata was awarded the 2020 Standard Bank Young Artist Award for Music last year, the two of us met up for an interview at a quiet Johannesburg restaurant and I asked him what he considered to be some of the key moments of his career.

Engaging in the creative and collaborative scene of Cape Town in the early 2000s ranked highly, as did the release of his debut album as Spoek Mathambo, Mshini Wam, and his documentary on South African electronic music, Future Sounds of Mzansi. “And meeting Bheki? That was one of the most important moments for me,” he said.

Back in 2012, when Mokgata began touring the country to collaborate with South African musicians across varying cultures, sounds, and generations, he met a KwaZulu-Natal-based musician by the name of Bhekisenzo ‘Vukazithathe’ Cele. The multi-instrumentalist became a mentor to Mokgata as well as a collaborator on numerous projects. Now, eight years later, Mokgata’s new documentary Vukazithathe provides a glimpse into the life and music of the maskandi artist.

Set largely in and around KZN, and in rural Dweshula, Port Shepstone where Vukazithathe grew up, the documentary comprises sweeping footage (occasionally recycled and repeated) of the rolling hills and mountainous reaches of the area, where many of its crucial interviews take place. The city of Durban, where Vukazithathe often performs, also features, as well as a few short performance scenes in Johannesburg for the 2017 Afropunk festival. In this way, the documentary is short and uncomplicated in its composition. Mokgata allows his mentor to do all the talking, and to convey his own life story.

From shirking his cattle-herding responsibilities in order to practice guitar in the hills, and losing his father at a young age, to moving to Umlazi and pursuing a music career with nothing but his instrument and a bag of clothes, Vukazithathe’s recounting of his younger years is rich in sincerity and personal anecdote. These intimate interviews are some of the film’s best moments and are well-curated by Mokgata and creative partner Carla Fonseca (who also had a hand in the project’s editing). Vukazithathe’s adult life, however, is not without personal and spiritual strife, and a great deal of loss. The documentary largely mirrors this trajectory so prepare yourself for a hefty second half.

Central to Vukazithathe’s personal journey is the story of maskandi, which the musician unpacks, picks apart, and reassembles at various points throughout the documentary, sometimes through interviews with Mokgata, other times by simply picking up his guitar and playing. My initial feeling is that the film could have benefitted from the inclusion of varying takes and perspectives on the genre and history of maskandi (Vukazithathe is the only source who speaks about the musical genre), but then it seems like Mokgata’s intention for the documentary was always about paying tribute his mentor – a living maskandi legend – more than it was about contextualising and documenting the style of music he performed. Either way, Vukazithathe serves as a short and detailed repository on the style, sound, history, and instrumentation of maskandi.

Finally, a moment to celebrate Mokgata himself. Throughout his own musical career, as well as his frequent collaborations across the realms of art, music, film and more, the interdisciplinary artist has always strived to celebrate the organic efforts of South African artists, and place them on a platform for the rest of the world to engage with. To my mind, Vukazithathe is simply another one of Mokgata’s efforts to get the rest of the world to pay attention to the incredible and often underappreciated work we’ve got going on, here. Certainly, this documentary will not be the last of Mokgata’s efforts in this vain.

Vukazithathe is available to view here.

(Some changes have been made in the introductory paragraphs since first published, in order to clarity how Mokgata came to meet Vukazithathe. The previous version read as if Vukazithathe formed a part of Future Sounds of Mzansi, Mokgata’s previous documentary)