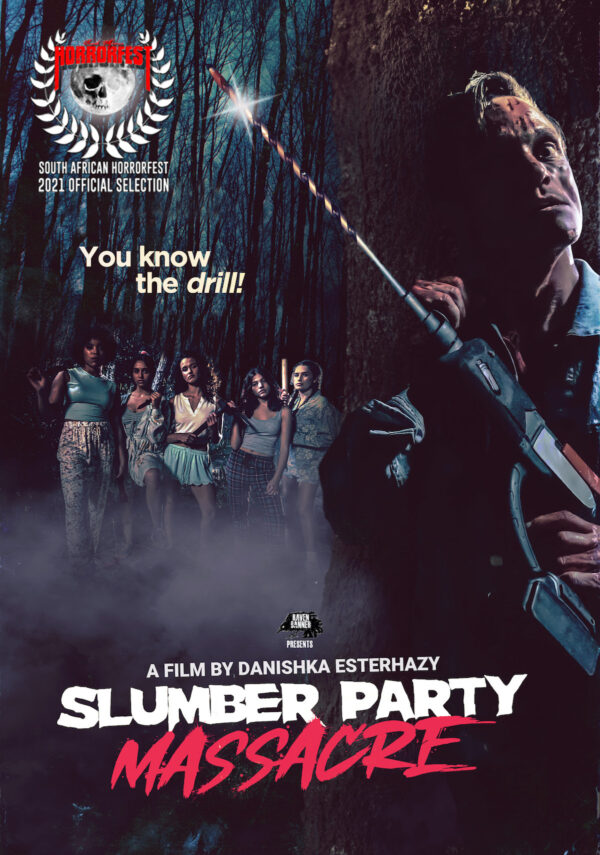 One of Cape Town’s favourite comedians has become a power-drill-wielding killer. Rob van Vuuren, known for extracting belly laughs from the audience with his tales of family life and acting travails, is starring in the international schlock horror Slumber Party Massacre. And he’s loving it.

In truth, Rob’s success as a stand-up comedian has a lot to do with his acting ability. A graduate of Rhodes University drama department, he studied under some of South Africa’s best performers and teachers, such as Andrew Buckland, Gary Gordon, Lindsay Reardon, and Juanita Praeg, and has acted brilliantly in theatrical productions of Shakespeare and Beckett.

He is also no stranger to the screen but horror was a first for him. “It was so much fun,” he says, “I’d love to do more. I’m totally down with being typecast as a horror movie murderer.”

But without giving the plot of Slumber Party Massacre away, he stresses his character is “a red herring”. “It’s all about the girls. It’s a feminist piece within the genre. It’s about upending the misogynistic tropes and stereotypes within horror.”

In this sense it is not dissimilar to Quentin Tarantino’s Death Proof about a murderous stuntman who uses his modified muscle car to kill young women.

He says Slumber Party Massacre is a reimagined version of the original by the same name which was released in 1982. The original and this modern remake were both written and directed by women. In the original, the writer was Rita Mae Brown and the director Amy Holden Jones. This one was written by American Suzanne Keilly and directed by Canadian Danishka Esterhazy, with an all South African cast and crew.

True to the slasher/schlock genre, it’s almost as much a comedy as a horror, and the original idea to “subvert the norm of the medium and how sexist it is” was taken even further this time around. Rather than the camera lingering on vulnerable female flesh, Rob says there’s a wonderfully sexy pillow fight with guys displaying ripped abs and pecs.

Rob’s talent for physical performance was his trump card in getting the part. He says the casting brief was to copy the over-the-top performance of the original driller killer Michael Villella.

“For me it was almost a physical performance, it was about getting this guy’s movement right.”

“I’m at home with that, and of course to also play with the comedy.” He admits that for South Africans who only know him for his stand-up comedy, they’re going “oh my god you’re the murderer, WTF”, but the target market is international and don’t know him. And if this is Rob’s international break into horror films, he’s very happy to splash on the fake blood.

Slumber Party Massacre is having its South African premiere at HORRORFEST at the Labia Theatre on 10 November at 6pm. A number of the cast will be in attendance.

Tying in with Halloween, HORRORFEST, now in its 17th year, opened on 27 October, and closes with Slumber Party Massacre. The festival is a hybrid live and online event. Go to www.horrorfest.info for the lineup.