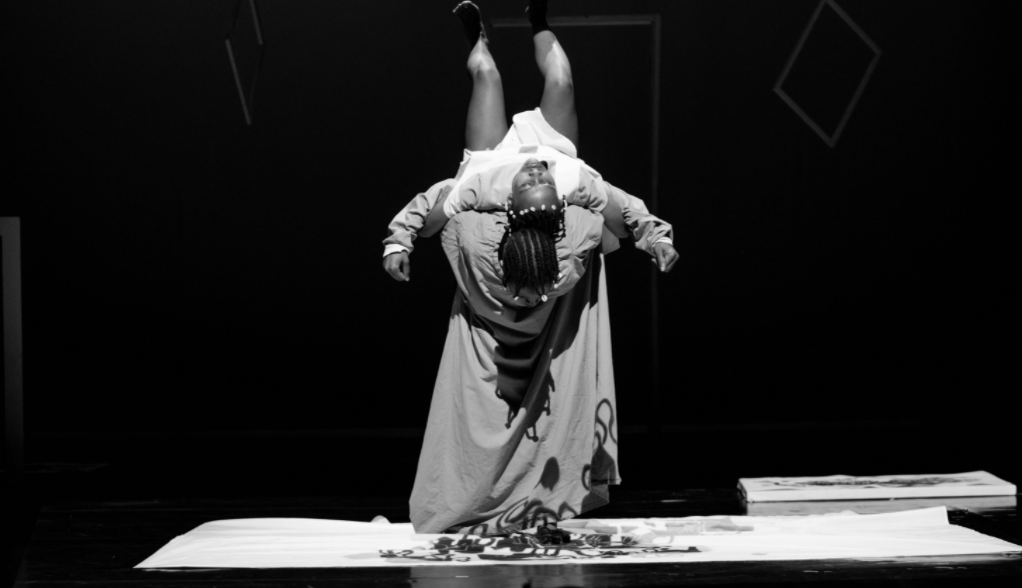 The experience of transition is maddening. Each moment of lucidity becomes a high-high, an ‘I’ve got it feeling’ like no other. But every moment of confusion feels like a deep loss, as though you’ll never make it to the other side of this frustration. Transitions are painful. You never know what life will be like on the other side. It can feels like you are losing your mind. This is the premise of Old Soul Waiting, a work set in the transition-period of a woman who has received a calling.

Slindile Mthembu takes the metaphor of mental illness as the setting of her dance and narrative experiment, as it is often the diagnosis given to people whose ancestral calling is misunderstood. Ukugula, to be sick due to a calling that has gone unheard, is often misinterpreted as a medical illness rather than a transition to a fuller life. Ukuphilisa, is the same word in isiZulu for being healed and being given life. Old Soul Waiting plays with these multiple meanings and misunderstandings, attempting to translate the experience of being called.

The character Mthembu plays in her self-written, self-choreographed work traces her story all the way to her birth. She tells how her mother was abandoned by her father. How her mother refused to love her and dropped her off and left. The story pieces together the child’s realisation she has an “old soul waiting” in her; an ancestor calling. But there is an obstacle blocking her path – a nurse trying to keep her from crossing over.

The woman and nurse dance a duet of cradle-catches and turns. The woman holds the nurse in her arms like a baby. The nurse mirrors the woman’s movements as they move around each other on a blank white canvas on the floor. Dancing to the sonorous strumming of an electric guitar, Old Soul Waiting places the conflict of the calling into a refreshing conceptual scene. It is set inside of a modern artistic frame that sits strongly within the world of contemporary Zulu imagination. The live Maskandi tunes blends with the recorded music of artists like the avant-garde Sibusile Xaba. There is a clear attempt at experimenting with authentic contemporary form in Mthembu’s self-proclaimed experimental piece.

In the music, this is very successful. It is in tune with the performance and builds up to a black jazz crescendo. But the vocabulary of movement feels limited and repetitive. The pop-and-lock reverb effects at the beginning fade, the movement relationship between the nurse and patient blurs, and the storytelling overwhelms the physical intention. The dance fails to develop, overburdened by the effort to tell. And the telling is itself laboured by the translation of almost every single word from Zulu to English.

However, the ideas of Old Soul Waiting remain exciting until the end. Mthembu’s interventions are brought together into a neat bow. Even the gauche paintings that oddly litter the stage make sense as the possibilities of cross-disciplinary work are revealed. It is clear Mthembu is on to something with this refreshing concept.

Old Soul Waiting is an experiment that can grow into an exciting performance. As a work that is in the midst of its own transition, it has not reached its full potential, but what it is pointing to is fascinating. Mthembu is cultivating umsebenzi wokuphilisa through Old Soul Waiting.

2 thoughts on “Old Soul Waiting: Struggling across the threshold”