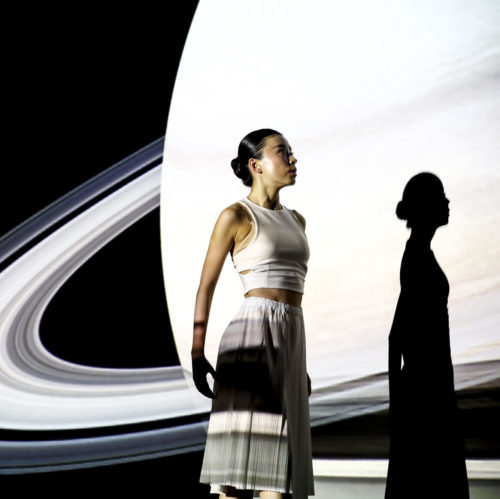 Reflect and write on an odyssey through the limitless universe? You have the afternoon. OK go.

The full gambit is employed to lay out an exploration of the universe (not just our solar system or galaxy, mind you), and our place in it. Forgive yourself for emerging wide-eyed and somewhat overwhelmed. Action! Climactic moments on average every 10 minutes. Will this pleasure never end? Nope, not until we’ve danced along every trail of starlight from Mercury to Pluto.

We have classical ballet, street dance, gymnastics. We have a backdrop screen against which the dancing happens as interactions with, and manipulations of, the massive graphics being projected there. Orbs of light, expanding and shrinking shapes, fireworks, even almighty supernovas. Immaculately in sync with these motion graphics on screen is the precise placement of every footstep, hand flick, neck tilt, shoulder roll, undulation and spin around.

We have a live band providing the soundtrack and the guiding rhythm for the on-the-beat meticulously-timed moments on stage. I loved the flitting camera cuts to the musicians jamming their pips off. Bass man, oh, slap the funk! Drummer man, rocking out!

Wow, Voyager is super-slick. It’s the kind of eye catching, modern pizzazz, explosion of entertainment we see on all the Got Talent type TV shows busy brainwashing the Instagram-generation into believing they alone, the judges & co., are the omnipotent authorities on what qualifies as art and creativity.

Enra is the Tokyo-based company behind Voyager. They’ve been producing dance and video-light-art synthesised works for the better part of the past decade. This is what they do. It’s not clear when this filming took place but Voyager appears to be a pinnacle of sorts, a restructured, remastering of their collection of previously released briefer episodes of the work.

What I like though, is there’s a sense of moving away from the insta-moment quick-woah hurrah that this style of work can elicit from within the youtube autoplay roll.

Meteors are quietly suspended in space. No air. No gravity. A solo figure moves minimally in shadow, a small beam of light the only signal of activity.

A duo seamlessly intertwines within a sphere of blended metallic colour. Attract and retract. They are the calm before the storm, the inner workings of an atom before the big bang birthed us.

Once in a while, far in the distance, like a fading memory a roving satellite appears– a reminder of our beginnings, our home, our miniscule place in the galaxy.

Softly, melancholically, our voyager envelops in her hands dying stars. A rhythmically slow beat chimes at each extinguishing. She then gracefully sinks lower, down, collapsed upon herself. Alone. The beat has become a hospital machine beep. It’s quiet now.

Layered in between the scenes of exuberant jubilation, these pauses allow a glimpse into the abyss, a flutter of thought about how insignificant we really are down here below the atmosphere, against the backdrop of the universe’s infinity. No matter how important we think we are.

Look, at times I felt I was watching an interesting compilation of Windows screensavers through the ages. On acid. And I’ll be hard-pressed to answer whether or not the dance alone would stand strong if trick by trick the ‘extras’ were stripped away. That’s a tough discussion because firstly, each mover on the stage is an accomplished dancer, and secondly… this is Enra’s thing: choregraphing with the tech in mind. It’s inherent to the choreographic choices and style. Some local works come to mind from recent years where the AV is tacked on as an afterthought – a superficial effort to boost the show’s “wow factor” – soundscapes and projected imagery in ‘response’ to the dance and usually not worth the time to mention. Almost as bad as an unjustified smoke machine.

Enra works their video creations and dance from the same creative impetus. The video is not simply an enhancement but integral to their product. Many of us hold onto an idea that traditional theatre spaces are one of the last strongholds against the technological age – a refuge we can visit where the live and the personal still exists. Where we hear the breath of the actors, smell the sweat of the movers, and feel it all in ‘real’ time.

There is always the outdoors but we seem unable to visit there without #posting #on #instagram anyway.

This is the digital age, folks. If you have the means, you have the screens. And Enra embraces and integrates this approach, delivering a polished package to Generation Tech. Why not.