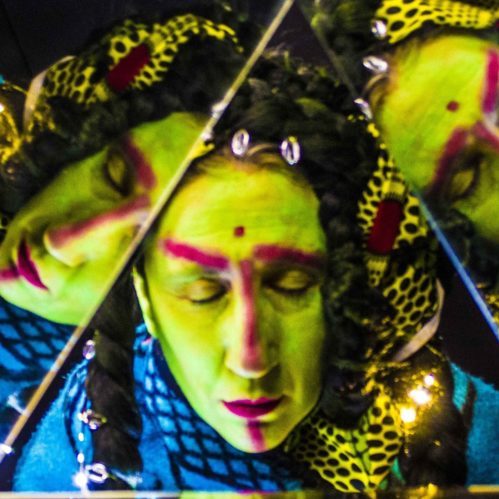 The Eye of Rre Mutwa has one of those concepts that thrill you because it could go so wrong. A virtual reality Afrofuturist work of cyborg identities, is a visionary experimental leap.

Credo Vusamazulu Mutwa is seen as a human database whose knowledge could’ve been stored and shared on a cloud, if we were connected to the futuristic possibilities of intelligence. The Eye of Rre Mutwa mourns the loss of the wealth of knowledge that Mutwa died with at the beginning of South Africa’s lockdown. In the futuristic mode of the film, Mutwa is depicted as a seer who was connected far beyond his time. And, the pun on being connected through the internet as well as spirit is an extended metaphor throughout the film. Mutwa is someone who saw the past, present, and future because of his connectedness to ancient African knowledges. This homage tries to further the work of protest that Mutwa lived for, was persecuted for, and died having written books for.

There are a few inconsistencies in the writing of The Eye of Rre Mutwa. Khoza, for example, is listed as playing Credo Mutwa but speaks rather as a narrator who tells of Mutwa’s history. In the film, Mutwa’s role as a seer is highlighted by the symbol of the eye; not embodied, in Khoza’s performance. Khoza does not seem to play a character just as Boyer is listed as playing herself. The symbol of the eye is physically represented as a third-eye pasted on Boyer’s persona. The eye is featured metaphorically in the text as well. When Boyer and Khoza trace through the history of different industrial revolutions, the personas jokingly ask: ‘They had electricity but were they enlightened?’

It is noticeable that whenever Khoza speaks of the “Zulu” knowledge Mutwa imparted, he seems to pause. This vocal hiccup may be because Mutwa’s work – while steeped in his Zulu heritage – was deliberate in its bridging of different South African and African languages and knowledges. In fact, the title of this film refers to Mutwa with the Sesotho term for “Father” and not isiZulu, so it seemed to speak to how Mutwa’s is an importantly pan-African teaching.

The writing in the first part of The Eye of Rre Mutwa relies on cliché to communicate. This makes it quite kitsch. Boyer’s persona says, ‘I was blind but now I see’. And, with even more kitsch effect, they say, ‘I spy with my virtual eye…’ while pointing to the eye on their forehead; the third eye, of course, as though to ensure the conceptual terrain of the piece is unambiguous. There is no room for interpretation in the direction here. Everything is spelt out in the essay of the text. In fact, it seems that the writing tried to merge something of an essay with the fictional form of narrative. Interesting but unsuccessful. The work uses a didactic form of direct speech that could do with some of the poetry of Mutwa’s writing.

But, as it clearly falls into the space of protest, the work plays itself out without nuance. This is not necessarily a requirement of the form of protest. There is much protest art in the virtual NAF this year. Protest forms part of the tradition of South African theatre and film. There are some examples of films that work with a poetic sensibility present on the vNAF site. This is not what The Eye of Rre Mutwa was after, however. It seeks to deliver a message that is educational and clear. So, in the second part of the film’s writing, where the argument of the essay is made clearer, the piece is stronger in its thesis. As protest goes, there is a clear call to action. The call is: ‘Be aware, my children. Do not let history repeat itself,’ Khoza says, invoking the words of Mutwa. We are to educate ourselves with indigenous knowledges to ensure this. Progress is then spelt out as what is really being questioned. Progress is questioned for how it blinds us to the deep-seated issues of racism, classism, and exploitation that fostered the different industrial revolutions in western history. Boyer’s persona says, ‘Refusing to see is a deliberately self-stunting act’. And, this is why the seer Mutwa matters to this piece. The seer’s work was to try to help others see. To help Africans see their history and see their rich heritage. To help white colonisers see the value in indigenous knowledges and histories. But, even as this thesis becomes thoroughly clear in the second half of the film, the kitsch-factor finds its way in. ‘Let’s go black to the future’, Khoza’s persona says. And so, while the visual work is exciting in its futuristic style of design and cinematography, the piece itself feels like its protest uses a blunt tool. It’s akin to being hit with a bible to convert people to Christianity. Here, a different conversion is envisioned. The forceful conversion takes protest work “back from the future.”

NOTE: This work was initially loaded onto the NAF website in the wrong format, which meant it did not display as a Virtual Reality 360 degree video as intended. This would have negatively impacted the viewing experience. It was reloaded correctly on 3 July, after this review appeared. – ed.