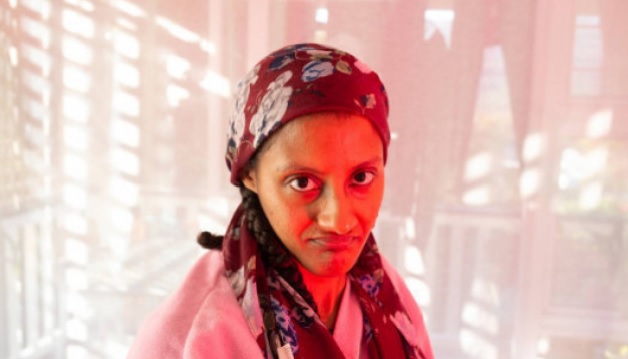 “Hallo.” This is not a greeting so much as a threat.

“Moetie vir my soe ko aankykie,” says Antie Wi’Oekal (Aunty Whoever). She’s in her old gown, mug in hand, hair in a bun. She needs to find a new gown. This old gown is her ever-end. This Auntie is one we know.

She will not be patronized: “Jy hou vir jou so kakhoog, jy kak mos icecream.”

An avalanche of phrases associated with this stereotype tumbles from her mouth. Then, with a jolt of an elbow, like a glitch, one line becomes a refrain. A plea, eating at her neck. A scream, breaking through her sternum. She’s possessed by it. A casual phrase becomes distorted, dispersed into a multitude of voices. She is distraught repeating this off-hand comment. Until it suddenly stops. And Auntie takes a sip of her coffee, tugs at her gown, and carries on like nothing happened.

Her rambling and ranting continues, “Jy wiet mos”. She’s annoyed by all the cats around her, “Net ‘n klomp katte hier”. She’s determined still to get a new gown “Soek ‘n nuwe gown” – This fixation is a boiling one. We see it on her warped face. She is losing her shit with these damned cats. “Moet net nie my bors warm maakie.”

She’s flipping through the channels on the TV filling our screens, “My fellow South Africans…” we know these lockdown channels. As Auntie flips through them, so we see Marc Lottering as Aunty Merle on the screen for a few seconds. An important reference. Moving as she flips through the channels, she’s sliding upside-down on her chair, deep in the cabin fever. We know this lockdown stasis: “Nee meisie, my dag was heel productive!” It’s shrill and contrived. A lie we’ve all told. “They stole my iPad,” another current reference. “Moet ek nou wiet waars die man se ipad?” asks Auntie, in a to-die-for deadpan comedic moment.

A puncturing Meow! is met with Auntie’s high-pitched Jaaaaaa! in response. Repeatedly until this dialogue, this call-and-response devolves into something uglier. Now, Auntie is giving this cat the “full treatment”. Brushing, washing, and treating the cat’s hair, Auntie remarks: “Jy’t nie ‘n regte draad nie.” This invokes a larger reflection on hair politics. This line is repeated. At first, it is simply said as an observation. Then as a statement of fact. Then it becomes a reprimanding, until it finally snowballs into blind rage. “Jy hettie ‘n regte draad nie!” she screams incessantly at the cat, still doing its hair.

The Theatre of Cruelty and its pioneer, Antonin Artaud, are living in this moment. The cruelty is the sensory disruption intended to shock the audience. And, true to form, the gesture becomes grotesque, the sentence now a chilling incantation. We’ve been bombarded, we’ve broken with the rational and we now live in her world. It’s fucking terrifying what Faith Kinniar does with the familiar. This is the work of a surrealist, a top-tier satirist with unflinching delivery and command of timing and tone.

This Auntie is going befok because she can’t get a new gown. I want to go and get her a new gown FFS, if it could for a second fix things, quell the loud fracturing. This simple mundane thing is overblown and derailing everything. We begin to understand why.

“Die gown. So baie gedra al. Ek voel ek rafel uit.” And there it is, the moment we realize that the issue is not one of a lapsed mundane errand, but an essence interrupted. The Auntie is reduced to this old gown, she’s essentialised by it. Just as so-called coloured aunties have been reduced to and essentialised by this trope. By men, by whites, by the media, by theatre, by comedy – endlessly.

This worn gown, threads unraveling, holes widening, has trapped her. Caused her urgency, her fixation, her resolute demanding. But when the music fades, it’s a whimpering that ensues for “’n nuwe gown.”

This shrill shrewd coloured woman trope, as we’ve so often seen her depicted, as we continue to represent her, whether for tragedy or for laughs, is rooted in a gendered, racialised, class-specific gaze. These characters, these aunties, their way of speaking and being have been mined for comedic value by many. Coloured woman are often reduced to a punch-line. Unworthy of specificity or backstory.

Here, it’s deconstructed. It’s in her Eartha Kitt-heightened laughter, “het jy al in jou longe ge-orgasm?” Kinniar breaks her. Watching her break is also hard, because we’ve come to love this relatable character. But this stereotype, when pushed to its limits, is not just crass and funny, nor simply brash or common – it’s bleak and oppressive. She forces us to confront what it is: representation without nuance. This production does something remarkable in showing this up. It caricaturizes and problematizes simultaneously.

The naming of this absurdist play, Antie Wi’Oekal (Aunty Whoever) is highly deliberate. The Brechtian minimal set, class commentary and lack of character name is telling. Who is this aunty apart from a trope? Antie Wi’Oekal is all those aunties we’ve seen depicted on stage and screen. She’s all of them in one, distorted to breaking point and stretched into gimmicky meaninglessness. Her mundane phrases are repeated and heightened, until you feel them snap in your spine. Something is wrong. We’ve snatched her humanity.

“Vat my terug hel toe,” says Auntie. With tropes, we don’t ever get a glimpse into what their particular hell is like. In this play, we do. It’s dark, wry and devastating in the right ways. It’s made me re-examine both the way I consume and create art.

Antie Wi’oekal will be availabe to view on demand at the National Arts Festival from 22 – 24 July.