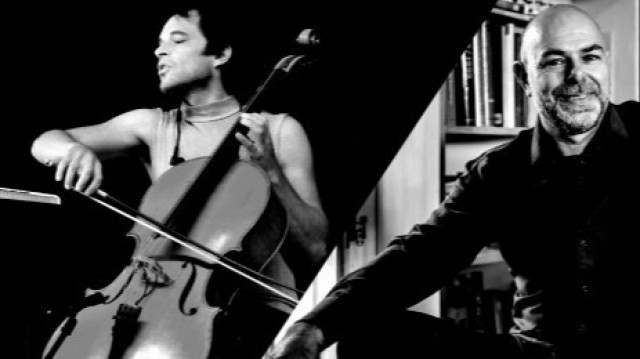 I took a breath. Maybe the first real one I have taken in months, thanks to this show. Things have been tough, we are tired – most of us – and heartsore. A little poetry, the honesty of improv, can be balm for a worn soul. If you’ll allow yourself the pause.

In Fearless Flow, HA!Man and Anton invite us to “shake loose this obsession with counting”. Let go of the “numbers game” – your weight, how much money you have in the bank, how many years you studied. It’s a pointed invitation, as we have become increasingly obsessed with new numbers too: how many days spent in lockdown, how many bodies lost to Covid.

“The numbers are coming for you,

Crawling outside your door,

Coming up through the floor,

This escalating appetite for numbers can stack up. Poet Anton Krueger’s words bring to mind this stacking, the counting. How, even when we are mentally at a critical mass, at emotional capacity, and unable to process, we’re still counting.

As our obsession is with numbers, so it is with references. Academics, journalists, artists, we know this well. Who are we if not the sum of our sources, our influences, our quotes, hyperlinks, colons and APA references? The duo strip away this stilted way in which we express. “Who are you saying?” asks Anton, referring to “the language that comes out of your belly”. How do you know it? Who are you if it’s not true? Perhaps we are just the confluence of who we know and what we’ve read. But we’re also defined by what (in this breadth of information) has stuck. I wonder now if we are just pieces of living intertextuality. HA!Man beats the keys like a drum at times, the keys are much more than keys to this musician. What comes out is edging towards a beast, a low and agonized roar. It’s in his face as much as it is in his instruments. It’s the sound that emerges when we’re stripped of the protocol of language.

The cello is haunting and soothing. Your eyelids close like you’re going home. The strings have a way of transporting one. The cello maybe more so than most instruments. The languid sweeping tones are a big presence. HA!Man’s cello is a person in this room, both on the stage and at my desk. The cello delivers a lament we’ve been unable to conduct. You can’t help but slip away into its calling.

“Everything else falls away for that moment,” says Anton.

When words no longer suffice, they hand it over to the falling notes of the cello. The instrument commands mourning, it encloses you, too exquisite to allow for the intrusion of mental clutter. It – and I continue to refer to the cello as it is equally a character – conducts a song of impending doom, but also of resolve and rising, of tinkering and teetering, of wrestling and reckoning.

In a meditation on death, reason and emotion, the duo takes us beyond the point of return, to “the slipping away”. Somewhere between consciousness and sleep, “something is passing, dying”. And with this, there comes a breaking, confusion, fear. If you, like me, have an incapacity to sit with your emotions and just let them pass through you, rather than have them dictate you, this show will teach you something powerful.

We are bound to the relentless need to ask and answer the why of things. The duo explores that these reasons exist, though they may be invisible to us. They also explore the possibility of: what if there isn’t a reason? Can we exist in the nonsensical? Release our tight clasp on reason. HA!Man’s keys are playful now, he sings of the inadequacy of reason. All the thought-loops that hold us hostage – they fall short. “They can’t explain what makes a nation.” A million rational analyses cannot mete an essence.

The performance In Fearless Flow doesn’t feel performative at all. In the barreling activity and fatigue of our lives right now, we can hardly embody a moment. Hardly embody ourselves. Watching this show was the closest I’ve come to it, to real pause, in a long while. HA!Man and Anton know their way in and around a moment, a sound. To move, they explain, we need a point of stillness to move from. Anton stands off-balance now, on one leg, one red sock squirming. For movement to happen, there needs to be a still point, he says, “even if it’s a small one”.

Everything is becoming. There are “only verbs”, says Anton and cue my favourite line of the show: “nouns are a fiction”. The certainty of things is an abstraction we’ve created because we need it. HA!Man’s chords are churchly now. We’ve been preached to believing that we want what we want. How futile a thing it is – to want. I’m shit at meditating, but this show centered me. The moments demand presence. And so I was ‘there’ enough to listen, to receive, to take in, and not to react.

HA!Man and Anton do not ignore the pain of the present. But they also refuse to fall sway to the defeatism of apocalyptic-speak. They do not indulge the all-too-present largely white South-African cop-out that this country is falling apart. HA!Man mentions the gravitas of the South African 80’s and Anton does not shy away from addressing the privilege of the rich who are protected behind high walls. There’s an honesty about the duo’s exchanges. These are two men who are very ok with being uncomfortable.

Limber and nimble, HA!Man dances. “Keep on dancing,” says Anton, “when the house is on fire – it’s a cruel song.” In a deliberately contrived voice, he says: “We shouldn’t stress too much hey?” This got an immediate laugh from me. It’s a line we’ve often heard. The impossibility of those words. They ring hollow because, as Anton follows up: “It’s too late for that.” We shouldn’t stress too little either, so what’s the right amount of stress, the actionable amount? Anton asks. He looks at HA!Man. The way he dances, Anton points out is like a “fairy in a Midsummernight’s Dream”. He is light as a pixie.

It feels wrong to be cheerful at a time like this – this is Anton’s most poignant observation. But we must. We must find levity in a time like this. And in HA!Man’s whistled melody, we start to find it. In the final few moments, the duo asks the audience: do we want serious or silly? This question, this asking, reminds me that we have this choice. In the midst of our cratering pain, we can still be silly if we so choose.

“There will be peace again” says HA!Man. Make a little space. It’s ok to feel sadness, fear, confusion, rage, defeat, whatever we feel, while we hope for peace to come again.

3 thoughts on “HA!Man & Anton – In Fearless Flow: Levity in a time like this”