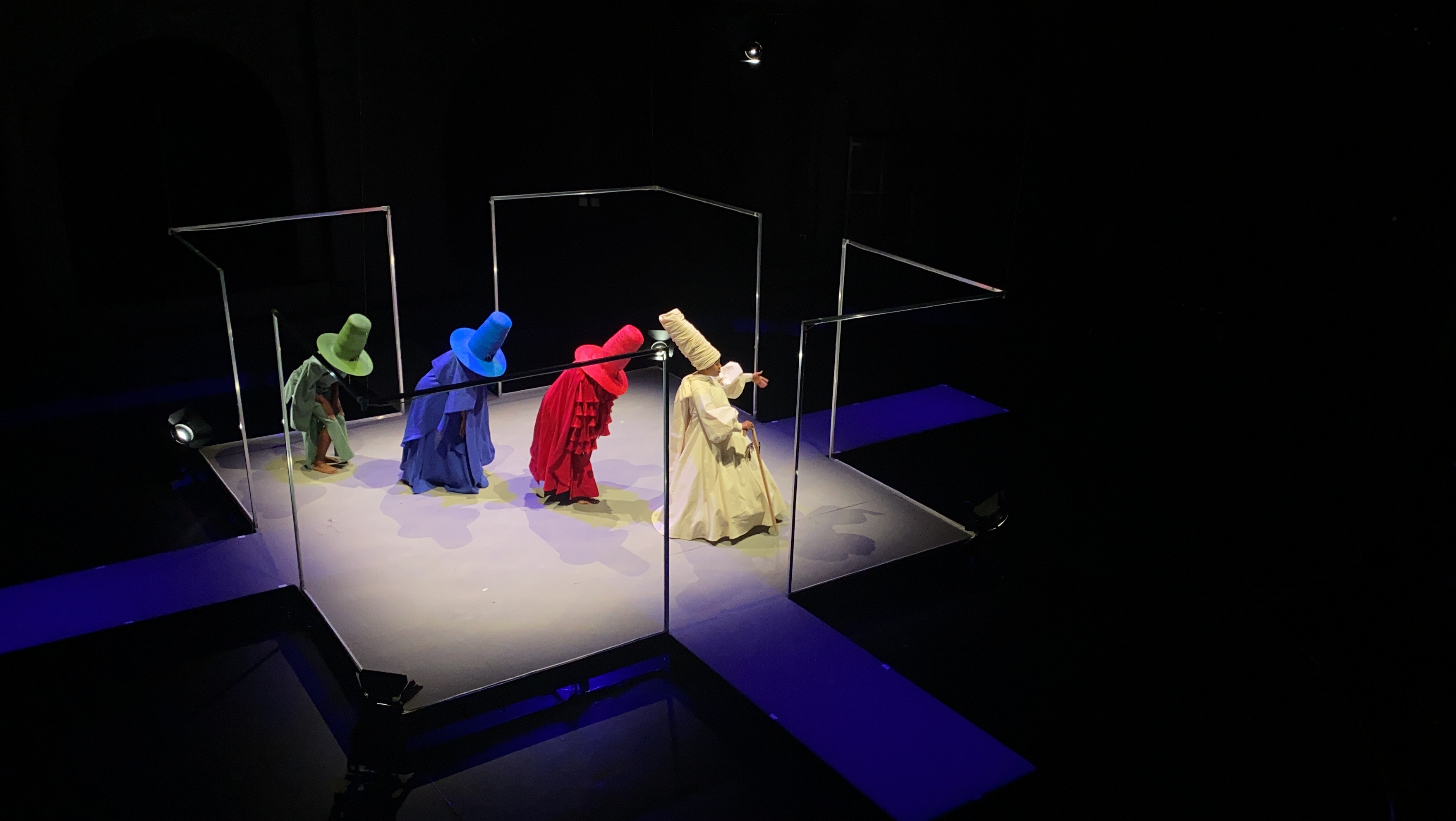 Is there anything more laughable than knowing you are meant for flight and have conceded your own light? It is absurd.

In a world of intersecting oppressions, it is absurd when we grow to believe that our purpose is to tuck in our wings and dance for mere claps in a cage.

The caged bird shrills for freedom, writes Maya Angelou in her autobiographical fiction, and Lulu Mlangeni’s KGANYA is a cawing, clawing call towards this light.

KGANYA, translated as “Light”, is also a command to shine, to enlighten, to awaken. The word itself means all these things. The work that Standard Bank Young Artist for Dance 2020 is also all these things and more. KGANYA is a refreshing piece of dance theatre that exploits a narrative structure much like the coming-of-age innovation Angelou created when she wrote I Know Why the Caged Bird Sings. In KGANYA, with its all-caps title, Mlangeni turns the gaze from the bird’s oppression only, toward a mirror of our own gaze. Mlangeni looks at herself and looks at us in turn, as though to say, “Kganya!”

There is nothing timid about Mlangeni’s dance theatre. A cackle begins the piece and runs throughout the work like a grotesque refrain. Two birds are being laughed at for choosing to remain in chains. Mixing text with the sounds of dance and voice, Mlangeni choreographs the dancer’s moving bodies in heightened and editorial fashion. Enter MoMo Matsunyane, an actor, clad in black. She wears a witch’s gear, with a fascinator-hat dripping over her forehead, her garment over-laid with transparent peplums and bags of oranges add a quirky and pointed flair. Her costume tells the story of a womxn who enjoys having means and prefers her birds to remain pretty in their metal frames. “Made of death,” she bellows. “Untimely awakenings… Ke tloga go tsamaya. Ke nako,” it is time. The time for awakening has come but she guffaws as she tells how the time has found the birds unready, unprepared. In the mirror-world that Mlangeni invents for KGANYA, we are implicated at every turn, so the laugh hits home.

High metal frames create a scene of open confinement on the stage. The frames are like walls made of our own mental shackles as much as the frames also mark the external borderlines of the raised square set. An island of confinement. The floor is painted to symbolize a wire-mesh fence, but as the brush strokes are light, the space breathes. Designer Oliver Hauser’s minimalist sophistication allows the dance’s physical tension to perform the imprisonment of these captured minds and bodies. When the birds appear, it is clear the team of KGANYA have created a symbiosis of forms to enliven this dance theatre.

Tebogo Ribane’s costumes tie the narrative strands together with dramatic delight. Lulu Mlangeni and Khaya Ndlovu appear at the back, also in black, before the enlightenment begins. They are in spandex with tassels at the arms. Two birds, or one? They are stuck to each other’s backs as they birth themselves into the world. The slow unraveling of the two dancers is a partnership more than a duet. They mirror one another in breath and form, rippling in unison, arms undulating and accessing a sense of nascent power.

As the dance grows and they move together separately, there are hints of clenched fists as they dance to the call of their own voices. They click their tongues and caw like crows crying after death at their birth. KGANYA is a coming-of-age crisis with the plot of an existential birth into an absurd world. Yet it is clear that every cackle is a command to awaken.

The dancers mix styles from tip-toeing balletic postures to steady gyrations as they side-eye the viewer through the lens of the camera. We are complicit in the unfreedom here. And MoMo Matsunyane’s laugh echoes throughout. “Selelo sa bana,” she says. The cry of the children is a tragicomedy. “Smile. Your tears are wasted here.”

Mlangeni’s narrative as an existential coming-of-age is refreshing because it almost refuses the naiveté of a traditional story of this structure. The birds are born with a knowing look. They refuse to smile from the start. “Ke nako,” Matsunyane’s character repeats. It is time. But where she sees ill-prepared fledglings, these birds are born with the ability to bear fists. They struggle. When they are separated and Mlangeni stands outside the mirror, Ndlovu holds her head in pain. They are never the same birds again and their bodies flick and flail until Matsunyane brings them all in line, with a third bird (Ipeleng Morafe) to follow her steps. But, even when they march in line in the second act, they are tall and stamp their feet and eventually disrupt Matsunyane’s glee. They appear like the colourful candles of a ritual ceremony in this second half. Dressed in bold primary colours in stove pipe hats, the trio makes magic of the lull of the march. They allow themselves to be arranged and re-arranged in lines until one rejects the business-as-usual formation and pulls off their sculptured business suit. It is Mlangeni who leaves the floor of this island of pretty confinement.

Back in the black spandex and tassels of her birth, but alone, she struggles towards the light.

If there is one thing that KGANYA drops, it is the ending. It is intended as an open ending; there are no neat endings in the theatre of the absurd. But the editing of the final moments of the work simply cut from the performance to an abrupt and unnecessary curtain call. There is no live audience.

KGANYA shines. Its spiritual question is held in a political space. The themes reverberate in a number of ways; about as many ways as we may feel oppressed. It shines a light on self-reflection and our need to pull through the despair of our absurd existence. Laugh or cry but, this caged bird dances towards freedom.