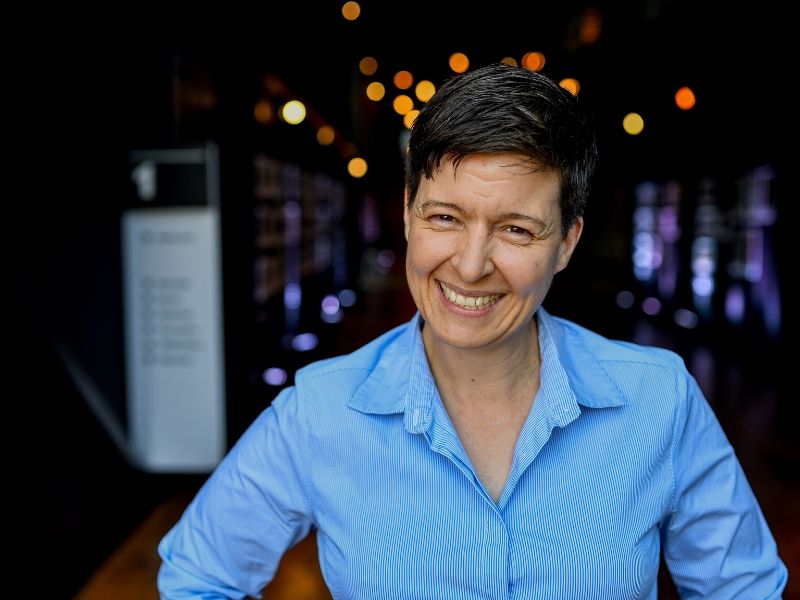 Monica Newton, the brand new National Arts Festival CEO, says the decline of fringe audiences and the water crisis in Makhanda are the two big problems facing the 46th rendition of the annual arts extravaganza.

The 45-year-old arts executive comes with a solid background in arts administration and understanding of the economics of the creative industry. She is a child of the Maluti mountains and raised by a single mother, Margaret, who, between running the family’s Maluti Mountain Lodge near Clarens, made sure Monica and sister Sarah were taken to every arts event.

“I am not a creative but I am fascinated by what artists bring to the table,” she says.

Newton obtained a masters degree in sociology at Wits, specialising in the economics of film distribution, and trained under revered labour activist and sociologist Professor Eddie Webster. Her career has seen her labour inside, or close to government as a creative industry consultant. She has been CEO of the National arts council (2012 -2013) and deputy director general of the national arts and culture department (2013 – 2017). Her last government post was head of department (HoD) of Gauteng’s department of sports, arts, culture and recreation.

In March last year, she was infamously and unfairly roasted in a racist rant by MEC Faith Mazibuko, who was videoed telling Newton and a colleague that only in her department did whites and Indians hold senior posts and if they did not do as they were told, they would be purged. Mazibuko had been driving the notion of “combi courts” in the department as part of the ANC’s election campaign in Gauteng. She accused Newton of sabotaging the propaganda exercise. Her tirade flew in the face of Newton’s role in obtaining clean audits for the department.

The Human Rights Commission ordered the MEC to undergo a day of “sensitivity training”, but a few months later Newton is here in Hand Made Coffees in The Old Gaol in Makhanda talking quietly and intelligently, but with gentle humour, about her new life as the NAF CEO.

She is instantly recognizable as being very different to her predecessor, the ebullient, colourful, corporate-raised Tony Lankester, who originally came out of radio journalism and whose timing and quick-thinking repartee was honed by his love of standup comedy. Lankester and former NAF artistic director Ismail Mahomed built a sleek beast of a festival, creating an international network of fringe festivals and successfully co-piloting the national event through two divisive and corrupt presidencies.

Always festive and fair in combat, Lankester has left Newton a fine vehicle – a 4×4 of course because this is the Eastern Cape – but with one or two wheelnuts in need of tightening.

Newton says, without providing figures, that audiences attendance at fringe shows have seen “quite a large dropoff”. An intense conversation with artists is happening and festival will be upping their marketing but also reducing the number of fringe venues by up to six.

Secondly, public anxiety over the inability of the Makana Municipality to keep water supply lines from the Great Fish river operating, has contributed to fewer fest visitors.
“People were nervous about water,” she diplomatically states before moving straight into the climate crisis: “We are in a long-term drought. Water security will be a problem. Five to 10 years ago the climate changed to a weird Mediterranean-type weather where you cannot tell what is happening.”
Living with the water crisis will become part of her festival plan. Last year, NAF spent R500,000 on bringing in water bowsers and keeping festival venues and accommodation supplied.
The weather and environment crisis is “a sustained continental problem” she says.

The more complicated issue of how to restore public faith in the fringe will involve sourcing more funds, bringing in a younger audience with their social media “influencer” power, and enticing bloggers back.
“The eyes (media) are no longer where they used to be,” she says.

With these factors weighing against the decision to make the pilgrimage to the festival, she says it is time to have a go at the high cost of accommodation.
Festival will be talking to the town’s business sector about “cost-effective solutions”.

She makes it clear that not only has the National Arts Festival moved out from the bunkers of the enigmatic building which sails high over the city and into offices on the higher floors with panoramic views, NAF has gone from being a tenant of the Grahamstown Foundation, to being its boss.
In her measured, diplomatic-speak, honed by years of public service, she says her job is to be CEO of both NAF and the foundation.

It is a transformation deal that has the full support of the foundation with its 1820 settler heritage background to use the Monument Building to “widen the narrative” of Eastern Cape history to include colonial dispossession.
But, from my perspective drawn from attending 27 festivals, 25 of them in a row, this is a national takeover which, one can hope, will put that old bogey of “white settler domination” to rest.

Newton says the R45m spent on NAF encompasses a suite of festivals – Scifest Africa, the National Schools Festival, right down to the new Movies at the Monument nights for Makhandians. All of this should all be seen as as “R&D” (research and development) towards the transformation of the “arts ecology” of SA.
When the value of bringing international producers to festival meet local artists, among a multitude of spinoffs are tallied up “R45m is not a lot to spend on the arts” she says, and there is a R6m shortfall that needs to be sourced.

As she heads for the 45th National Arts Festival from June 25 to July 5, her mind seems focused on how to keep the crowds coming. At this, point it is all about greater focus on how to market and manage the fringe.