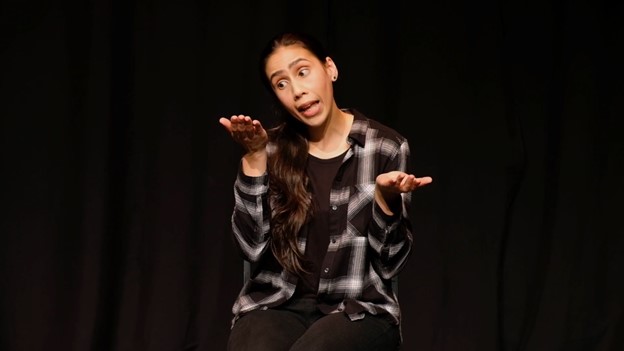 The enduring monologue: Solitude and language, the performative text. In the main, the theatrical monologue is seen either as a tool for the auditioning actor, or simply a part (albeit a vital one) of a fully-realised play. Less often is it given space to exist as a performance of its own. Over the past year and a half, though, theatremakers have returned to the fundamentals of the craft, and monologues, script-readings, and short-form, text-based recitations have enjoyed a renewed public focus.

There’s a lot of this sort of thing going on at this year’s vNAF, and theatremakers have made use of the monologue – both original and repurposed – to produce performances that embody, unpack, and puzzle out narratives and refrains that are at once personal and universal. They raise a few good questions, too: What is the function of the monologue outside of the greater script? What is the role of the body, here? How many more talking heads can we take? Mostly, it is the lucid performance of the spoken word, the simple joy of being read to, that is most apparent in these works.

Over the course of a few days, hunched over my desk like a gargoyle with earphones in, I listened to them all.

In (extra)ordinary, (un)usual, a team of actors make use of texts from The Monologue Project, each one penned by Australian playwright Pete Malicki for the purpose of providing auditioning actors with material to work with. Six actors tackle a monologue each, seated on a chair in front of a camera.

As expected, there are no bells and whistles. The set is bare, the performers plainly dressed. Needless to say, the whole thing’s premised on the ability to tell a good story – no easy task! Each performer engages in their own interpretation of the text, adding small flourishes here and there – the raised eyebrow, the dejected pause – but mostly, they stick to the script, as it were.

Content-wise, the stories range from disillusioned brides and opportunistic care-workers to pseudo animal psychics and disgruntled twins. They’re as goofy as they sound, in an endearing sort of way, and all of them wield a degree of macabre humour with a twist – sometimes expected, other times improbable. Director Faeron Wheeler does some work in the editing suite, chopping and changing between camera angles to suit the tone of each piece, while the occasional sound effect or bit of backing music doubles down on key moments in the performances to varying levels of success and gimmickry.

Having been penned by Malicki for general use by actors across the globe, the monologues naturally lack a rootedness in South African daily life. Still, a more localised remixing of the narratives – a few place-names, a bit of slang here and there – could have gone a long way in extending the works to a local audience. Outside of their mild absurdity, there’s no thematic thread or sustained plot points tying these monologues together, so if you’re looking for a quick-fix, Lizanne Peters reading ‘The Story of Darling Brown’ is a standout performance. Peters’ command of the text and the character it contains makes for a monologue that is warm, engaging, and conversational.

Rounding off the performance are six ‘lockdown stories’ devised by the cast. Again, these border on the light and fluffy side of the storytelling spectrum, but hey, it’s a pandemic and good news is in short supply.

Stories sing, shout, and shine in this collection of local, contemporary texts and scenes. Clara Vaughan is the conceptual mind behind the project, and also curates the eight monologues in Between the Pillar and the Post which are delivered in seven languages by a host of performers.

The monologues are short and sharp, rarely going on for longer than six minutes. The contents vary, but each piece mines a sliver of South African life briefly and incisively. White 4 Black and Montsho both deal with public and private notions of beauty, identity, colourism, and self-worth in an age of photoshop and filters, while Peu and Dineo do well to grapple with inner turmoil born from pervasive societal strictures. K’ster Conversations channels the high and low drama of the every day in Kimberly’s Galeshewe township, while Coming for You is a swift and devastating chronicling of a woman’s night out in South Africa. There’s also NAF-favourite Pretina de Jager who talks us through her new dance moves and ongoing attempts at being the cool kid in school with You Suck and Other Inescapable Truths, andthe inimitable Warren Masemola whose is’camtho monologue details flaming Carvelas, smouldering stacks of cash, and short-lived glory in Pure Light in Tight Diesel Jeans.

Unlike the other monologue programmes on offer, the Between the Pillar and the Post monologues are audio-only (or at least at the time of writing, they are. ‘EXHIBITION CAPTURE COMING SOON’ says the NAF). This means that outside of the accompanying images, which are useful visual vignettes nonetheless, you are left with only the disembodied spoken word to hold the narrative. The performers are not deterred. In the absence of physical performance there is a searing attention to language, cadence, and narration. At times, a monologue’s full emotional heft is captured in the sharp intake of breath, or through a sentence spoken with a smile. It is, quite simply, writing and storytelling at its best.

A wind-up music box version of ‘Brahms’ Lullaby’ opens up this set of monologues. It’s an odd choice for a collection of performances that require active listening on the part of the audience, but it finds resonance later on.

In The Memoir Monologues, four performers channel the writings of director Anastasia Amy. These monologues are specific to the lived experiences of South African women and excavate material – through the anecdotal, the poetic, and the everyday – that make use of universal points of reference. Disenchantment, the burden of consciousness, and the reluctant reality of halted dreams are a few of the themes that run through the stories.

Visually, each performer is seated in a darkened theatre beneath a single spotlight. Physicality plays a crucial role as the four actors personify their narratives in body and voice. In addition to the penned monologues, the play makes use of poetry and prose from the likes of Lewis Carrol – “Echoes fade and memories die // Autumn frosts have slain July” – as well as music by the aforementioned Brahms, all of which serve to reinforce the developing themes of disillusionment, virtue, and loss through the perspective of contemporary womanhood.

Form is interesting, here. Like the other two monologue programmes on offer, The Memoir Monologues is an anthology of individual stories grouped together by a common theme. That said, you can’t dip in and out of the show, selecting monologues as you please. Amy and her team have opted to edit each monologue into considered fragments that, though disparate, weave in and out of one another’s narrative arcs. The result is a rich and engaging body of work, the success of which is evident in its clear development of tone – a collage of myriad tales and perspectives.

All the above can be viewed online at the virtual National Arts Festival.