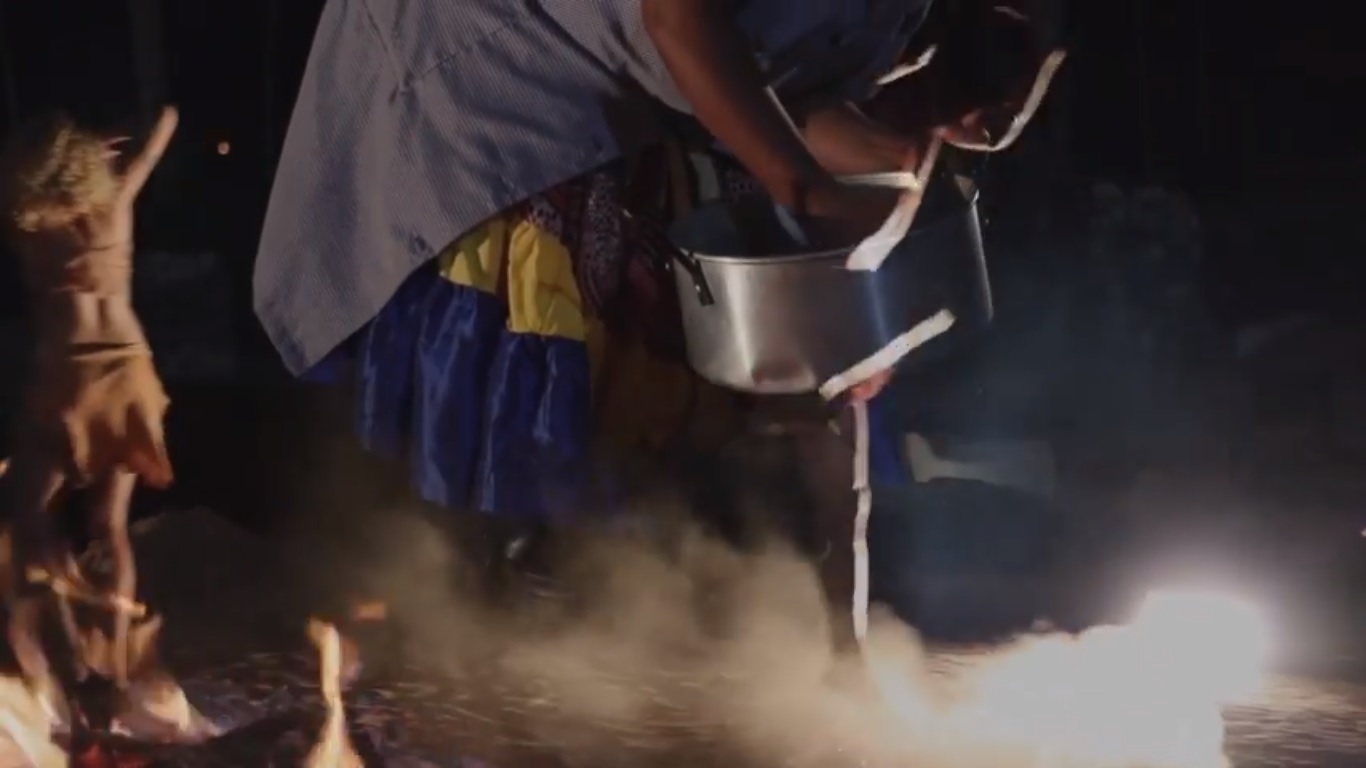 Namakwaland. There’s a texture in the light, a silence in the wind.

The russet orange land erupts in small mountains of sheer rock, sun glancing hard across the sky. Hard country, but rich if you know where to look. And look they did, the mining companies, the corporations, the extractors.

They prodded, poked, drilled, measured. And then they dug. And all the brown people who had made a life there had the ground ripped from under them, literally. Excavated, processed, poisoned.

The corporations took the minerals, the water, the health of an entire generation, and gave back nothing but hardship.

Gat Innie Grond, Wond in my Siel (Hole in the Ground, Wound in my Soul) places itself in this environment, in amongst its people. Self-described as a dance narrative, it tells a story, a part of a story, of Namakwaland. It tells it with movement, with grace, with words and phrases and imagination and warmth. And with music that turns traditional hymnal arrangements inside out.

Four young dancers in a desert with earnest intentions. It could so easily be cheesy, be a music video.

No. The tone is set at the beginning. We encounter a middle-aged woman, a working woman, a woman who gathers wood, carries water, and is much more familiar with struggle than anyone should be expected to be. We are introduced to this world through her eyes, and when the dancers dance with their controlled angular movements and footwork reminiscent of the rieldans, it is around the fire on which she cooks, in the yard, at her house.

The production holds this domesticity throughout, only losing grip on reality at the end, although Timothy Bowles’s Amazing Grace is ethereal, to be fair. Still, there were better choices than sunset and blonde hair. But other than this scene, which after all is not so terrible it can’t be indulged, the work is refreshingly grounded.

The yard – or the yaad – is part of the setting. There’s people sitting around, a dog wondering through, yet the work is never amateur. Rather, it is wonderfully unaffected, the camera incidental. Except for the choreography, some of these scenes – or ones very like them – we’ve seen, or we have if we’ve been lucky. A local maestro on a blik guitar, aunty sitting by the door, ‘n paar mense wat kom kuier. Just add alcohol, of which there was none here, but real as this work is, it doesn’t pretend to be realism. It’s metaphorical, and paradoxically quite slick, but what it points to is grainy as a Super 8 home movie.

This has a lot to do with actor and writer Esmé Marthinus, and the character she inhabits. A character we can feel as closely as the callouses we don’t have on our hands. And her story, and phrases. ‘Kyk hierdie fokken gemors’. ‘Ek hou niks van ‘n vuil naaiery nie.’

It is clear that the artists involved in creating this work know the place they portray. What Byron Klassen has conceived with Janine Lange’s PhD research, is an authentic, danced story conveyed through film, that, in placing performance in lived space, presents innovative scenographic ideas, and manages to thread disparate disciplines into a tapestry.

There were times when I wondered what it would be like to have weaved sounds from the environment into the work rather than having it covered by the soundtrack, but the music was so compelling and arranged with such originality that this was mere conjecture. Sylvester ‘Oom Dollie’ Fortuin’s blik gitaar blues is beauty all of its own.

Set in the Northern Cape mining towns of Okiep and Nababeep, Gat innie Grond, Wond in My Siel gestures to the exploitation of a people and the rape of the earth. It is also an act of remembrance, of compassion that feels like rain on a land that has forgotten a time before drought.

Rather than taking riches from the ground, it is a gem given to all.

Gat innie Grond, Wond in my Siel, is available to view on the National Arts Festival online platform until midnight tonight, 14 July.

2 thoughts on “Gat innie Grond, Wond in my Siel: A diamond from the dust”