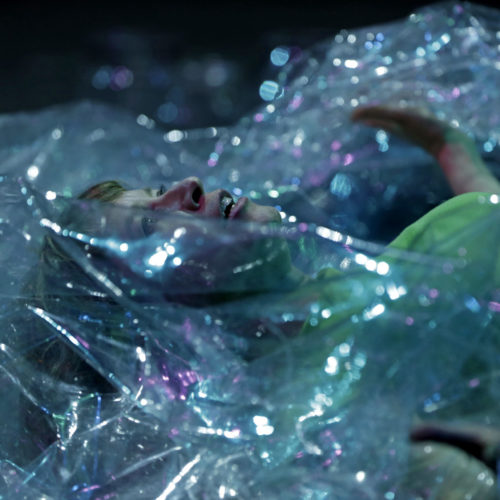 Grief can be a gentle process of learning how to live with your ancestors; not just with loss. Unfathomable whispers into the tissues you would use to hold the weight of tears from your eyes. It says that the burden of lost lives can be carried in the way water holds you up when you float. Tenderly. And, somewhat magically, this light touch on the heavy subject of grief allows a daughter to swim in the fullness of her father’s story and not just his passing.

Alex Halligey and Athena Mazarakis create a space where pulling tissues out of a tissue box becomes a ritual for connection. Tissues are little pocket notes where passing information is quickly contained. Tissues fly where the facts of a life are unknown. Tissues stick to transparent walls revealing a daughter on the other side, trying to make sense of her unfathomable grief. ‘How long do you grieve for?’, she asks. She is making this theatre piece as a ritual for grieving many years after the loss of her father. She swims in the waters of memory to clear a path for grief itself to be seen as a process that can be contained like the shore contains the ocean – with a soft touch allowing the waters to swell and subside just as fully as life does.

In the solo performance, Halligey connects the pieces of scribbled details pertaining to her ancestral history. She puts stories together to make a fuller narrative about who her father was. Because she fears he didn’t get to live out his expanse in the world. She picks up the pieces of his lost life and puzzles together an entire ancestry to fill the hole he’s left.

What emerges is a clearer view of the self. A sense of the creative and self-directed potential she’s inherited from her ancestral linkages. A story of spiritual seeking from her father links to the story of a grandmother who had tried to commit suicide but later dies in a car accident. Halligey calls their memory from the waters of forgetfulness and honours how even a suicide attempt could be a symbol of self-ownership. Mourning, you see, is enfolded in our sense of what was not allowed space in the human being’s life, as much as the actual loss of their life. Halligey provides a poetic lesson in the strange patterns of grief. ‘My dad died when I was 20,’ she says. ‘And, for the first years after he died, I couldn’t tell people without laughing immediately afterwards… It was the enormity of it’. The unfathomable is not only death but, the weight of grieving.

In Unfathomable this same peculiar process becomes a ritual of recovery. All the ancestors are recalled to memory. Then the weight of their lives and the losses they incurred in living those lives are all wafted into a pool of their co-mingling parts. Tissues are pulled together in the pool of a glass coffin and then stuck together to create the figure of Paul. A father in miniature. Paul is then recreated again, into a life-sized plastic figure that the daughter can lay next to. Paul is then reconfigured into a pool of water where the daughter can swim with her own memories and all those of her family history. Paul breathes love into so many different parts of the piece that the unknowable man becomes an expanse of ocean that refreshes not only a daughter and her lineage, but washes cool blue air over the space of loss that we all share. Paul’s presence in a blue shirt that holds the pain of his death becomes a simultaneous symbol of comfort and care. It is an airiness that Halligey’s work brings to the idea of grief. Lightening the weight of burdened histories, she shows how we can carry histories like a tissue in a pocket. It needn’t weigh us down to our own death. Grief can help us breathe again.

This is a magical theatre piece. On stage, the work transitions from blue to yellow hues in a way that makes the sense of living with ancestors both rich and light work. In the recording, billed as a “reimagined” series of vignettes, the viewing is frustrating. The work has been cut up into nine sections. The fragmentation is at odds with the connecting work done in the piece, where fragments of information are brought together to do the work of grieving, like water; bonds that hold to each other no matter the splits along the way. The nine sections each begin the work again and each has credits at the end. So, you will see the same opening title and credits nine times. In the festival website you also have to click back to the menu in order to play the next episode. And, if you have a phone that rings between, or a child or any distraction while you exit and search the list for the next episode, you can find yourself having to guess at which episode number comes after. This process takes from the work in an unfortunate way. Luckily, the work is so strong that you invariably click through in the hopes of catching the correct next episode. And, as I felt the annoyance of searching for the next episode and watching the title sequence again, without the option of skipping as I would on Netflix, I wondered if I was making an unfair judgement because of my theatre nostalgia. By episode seven I knew what the frustration was. It was that this was not a fully conceptualized splicing of the work but, felt like watching a show where every scene is cut with a blackout even though there are no significant scene changes. It is tiring. Each beginning, again, depletes your energy because it is simply uninventive. And, with nine separate episodes that don’t connect with the incredible concept of the work. This aspect was an unfortunately, unfathomable virtual rendering.