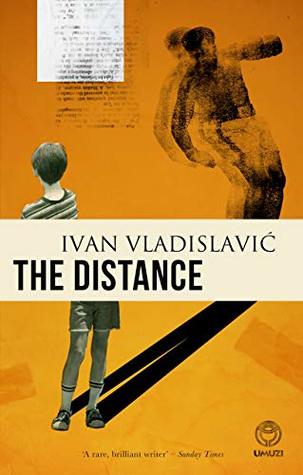 Such a strange book, The Distance by Ivan Vladislavic. It’s about Muhammad Ali, told from the view of a boy growing up around Pretoria in the 1970s. A boy who “fell in love” with him.

Fell in love in the way a boy can; a seemingly improbable infatuation with an idea.

It is also not about Muhammad Ali so much as it is about improbable infatuation, which in itself is can be about channeling one’s focus into a narrow plane to avoid dealing with uncomfortable realities.

The Transvaal, and parts of Pretoria in the background, were also familiar, as was the facility, which young Joe displays, of inward focus to clear the disturbing clutter of contradictions that characterised apartheid South Africa.

Ali, as Joe prefers to refer to him, for all the bombast and blood and lights of his fights, was abstract to a boy in sanctioned South Africa never able to see him, not even on TV. Information only available from what was in the newspaper, which he clipped and filed obsessively.

Even in this way Ali was many, many times more accessible than Nelson Mandela – mentioned once in the book – who, through his absence determined by National Party propaganda, was an unspoken shadow behind a state whose fear, to paraphrase Bright Blue, was huge and angry.

Then there is Branko, Joe’s elder brother, who in alternating passages provides his view on Joe’s behaviour. Branko is out there, questing rather than questioning. His view of Joe’s activities contains an elder brother’s indulgence, but also an elder brother’s detachment, which widens into adulthood, until Joe and his Ali scrapbooks appear in his well-ordered middle class existence.

Joe mentions Ali not being quite black, at least not in the way a white Pretoria boy would have been familiar with blackness, and thus somehow holding a middle ground, being, as it were, a racial bridge. Ali also spoke out, stood up for his own agency, firmly stating he be addressed as Muhammad Ali, his Islamic name, rather than his birth name, Cassius Clay. He was famous for blowing his own trumpet, which was frowned upon by the patriarchal Afrikaaner culture that infused every aspect of whiteness no matter what language you spoke.

Hence Joe’s father rooting for more modest George Foreman, with Branko following his lead. Vladislavic doesn’t say so, but supporting Ali, and particularly cutting every mention of him from the newspapers to be glued in a scrapbook, was in a conventional white South African household, a revolutionary act.

This is something Branko has to make sense of later on.

Having the elder brother comment on the younger is a wonderful lever for the author to view his younger self, although Vladislavik is too smooth a writer for this, or any other device, to seem obvious, which is what makes this book linger much longer than the recognition of time and place warrant in themselves.

It was a strange read as in there was no reason not to put the novel down at any point, yet the writing rolls on and through the next scenario, until you realise you’ve gone further along than you expected, having enjoyed the view from one bend to the next. And then finding a subtler picture underlaid, and a lingering unease, unsettling as the feel of glove on the cheek during a mock-punch at the weigh-in.

The Distance was published in 2019 by Umuzi. Vladislavic has published numerous novels and stories, won numerous accolades, including the Windham-Campbell Prize for fiction, and is a Distinguished Professor in the Creative Writing Department at Wits.