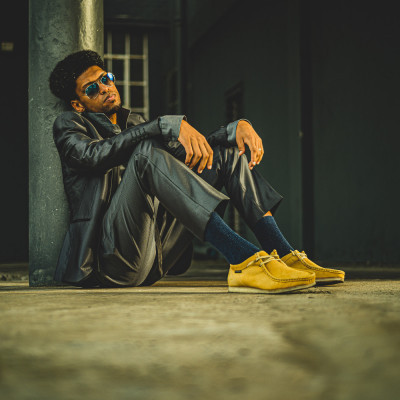 It’s a tricky time for the music scene right now, so having Quintin ‘Jitsvinger’ Goliath and his trio Restorians on the Standard Bank Jazz lineup is a privilege. The audience is all responsibly masked up (both mouth and nose) in Long Street’s Gallery 44. It’s an intimate venue, close enough to see the musicians’ every expression. Having been denied live music for so long, the masks couldn’t muffle the audience’s elated responses to the trio.

Jitsvinger takes the stage wearing his signature Graasies (Grasshoppers), sunglasses and afro-comb, he commands the space yakking (dressed in) an outfit with old school VHS print. A consummate performer, Jitsvinger is a self-composing jazz cat and an Afrikaaps rapper with finessed flow.

There are elements of physical theatre in the way he embodies storytelling through music. Each word, beat, pause and emotion is intimated in his long limbs, shifting postures and facial expressions. This was most vividly showcased in Die Reenmaker, a track based on improvisation. Viscerally, it invokes ancestral lineage and invites us to remember our heritage, “nostalgia soos iets vergete en iets verlate”. The song foregrounds Jitsvinger’s emotive poetry “vet en ryp vannie reen” with drummer Chante Phillips catching every cadence. It feels both exalted and firmly tethered to the earth in soetwater, boegoe, bloed, en vleis.

After taking us back to when we used to dance around fires, the trio brings the audience full circle to a bring-and-braai atmosphere with vocalist Marlon Swai lamming (sitting) on a cooler box, in a bucket hat, head bowed, grooving (this rapper later comes through with potent verses and burning delivery) and DJ Harold Galeta setting the tone at his laptop and soundboard.

Lyrically, Jitsvinger does not shy away from the violence of Khoe displacement and erasure or the complexity of identity. But this conscious artist is not without levity. The pendulum swings from the heavy memory of Casspirs to the whimsy of butterflies. The show is unapologetically Kaaps with charismatic stage presence, jas (impressive) instrumentals and immaculate flow. The confluence creates a rustig (effortless) vibe that can escalate into harrowing commentary one minute and then de-escalate to a warmly familiar sound you can jazz to in the kitchen.

Vocalist Azaria Zulu appears resplendent in a silver sequenced bodysuit. Her voice soars on a Melanie Scholtz blues number, See You Once Again. The sentiment hit me in my chest from the opening chords. It’s the kind of music you can sink into, quicksand music. So soothing, you feel dipped in molasses.

In a display of expeditious talent, Jitsvinger strums intricate jazz-funk chords while rhyming at a rapid pace. The bassist, Chadley Beukes, wearing black and red Jordans and an infectious smile, brings unbounded energy to the stage. His solo dowweled, the bass-lines were unrivalled.

The chemistry between the band members was such that I found myself tapping my pen and jolling in my chair rather than scribbling my notes. Audience participation was encouraged through vernac call-and-responses “Ek hettie tyd vir jou nie / As jy nie hiervan hou nie” between jazz riffs.

Smile is my personal favourite Jitsvinger track, and the trio had the audience singing the chorus. Of course, I smaaked (wanted) to jazz to this upbeat nomma, but it wasn’t that kind of party. Another popular fave is Breinsuiker from the EP Jitsologie available for streaming on Spotify. Jitsvinger explains that this sensuous track is about caressing your mind. This sultry binneboud song can be dangerous on rainy nights.

The Jitsvinger trio pay tribute to their musical influences, sampling Ghoema pioneer Mac McKensie and The Genuines. They also made a dedication to their contemporary brothers-in-jazz Kyle Shepherd and Benjamin Jephta. You can catch the full performance on the National Arts Festival website streaming as of next month. For rest of the stellar live lineup, jazz-heads should check out Siya Charles and Mandisi Dyantyis performing today, you can book though Quicket.