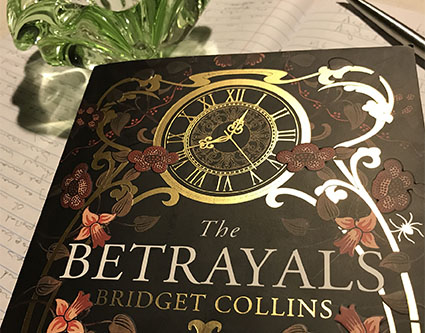 The poorly written book is a fascinating phenomenon. Unless you bump into Melinda Ferguson, it is notoriously difficult to get a novel published. Best-selling writers such as John Grisham, James Patterson, and Stephen King – whatever your opinion of their books – suffered scores of rejections. Classics such as Frank Herbert’s Dune, and Joseph Heller’s Catch-22 were rejected 23 and 22 times respectively. Then there’s the Lotto-like odds of actually making a sufficient living off writing novels, which should put all but the most committed aspirants on the sidelines, and there’s the editing process the publishing house wrings the text through. Yet there are hundreds of mediocre novels pushed out every year, ranging from the inane to the best-sellers. Which is what Bridget Collins’ second novel, The Betrayals, is trying to be. Which is expected, as her first adult novel, The Binding, topped the Sunday Times list last year.

It tries. Really hard, and in doing so stumbles, and falls, mangling a Dan Brown-ish hand on the tension tiller, with a JK Rowling-esque quaintness in what is essentially a romance bedeviled by a series of misunderstandings, set in a rambling castle on a mountain, wherein is taught an aesthetic pursuit akin to physical theatre but with the additional encumbrance of binding it all to mathematics and music and art and concept through an arcane language. A bit like a humanities thesis, or what law might aspire to be. These opportunities are not explored in The Betrayals. Rather, reflection is cast aside in favour of the rushes of emotion that ripple back and forth between the protagonists, neither of whom are particularly sympathetic. Like an adolescent in a diary, they dither too much. All the time, actually. Take this passage, at random on page 229:

“…, and sometimes she even grins at something he’s said – although that’s a Pyrrhic victory, because she always dismisses him a few minutes later, claiming curtly that she has to get back to work. And every so often, as though she doesn’t realise she’s doing it, she gives him a glancing, elusive look that could almost pass for tenderness.”

There’s a lot of desire and anxiety.

No surprise, then, that much of the novel is in the form of, not an adolescent, but a very young man’s diary, which is a means to take us to what happened ten years ago. The twist that occurs in the plot, although cunning, and somehow sweet, is insufficient to make up for the mawkish dialogue and reflections between exasperating characters.

The most interesting characters are the ones least explored: the Christian scholar, Simon, along with The Rat; a girl who lives in hiding, stealthily surviving in the shadows, alcoves, attics, and unused corridors. The novel starts with her, and returned just often enough to keep me hanging in.

Collins’s lack of place seems deliberately obtuse. The fantasy world, or the world of fantasy, is an arena rich with possibility for social commentary. The creation of other worlds is able to reflect our own back to us anew, and to reveal what was previously hidden by assumption or habit. Ursula le Guin springs to mind, but then she is an author whose praises I doubt I could fully express. Collins just hints at relevance. In the background, behind the roiling emotions of our protagonists, is The Party and the whims of its leader, the Old Man, and patriarchy and persecution of others, Christians among them, but these are mere gestures to obscure the fact this is a Romance, a sophisticated Mills&Boon. Which means it probably stands a chance on some best-seller list. Fascinating.

The Betrayals is published by The Borough Press, an imprint of HarperCollinsPublishers Ltd.