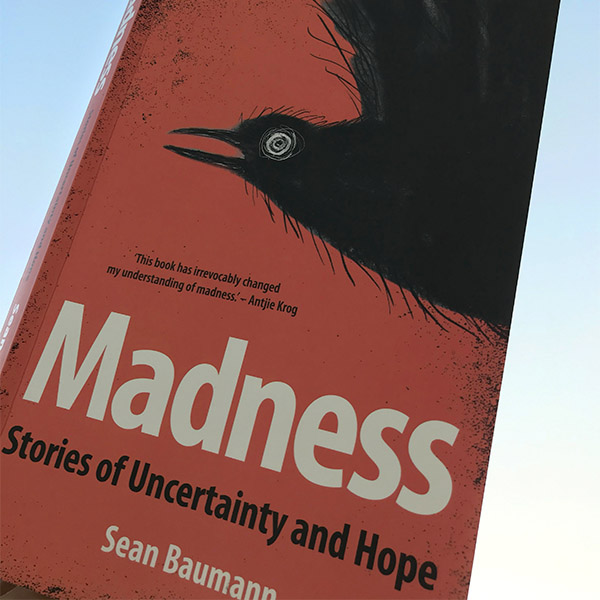 While waiting for my car’s tyres to be changed and wheels balanced in Maitland recently, I was approached politely by a young man who wanted to ask something of me. It was an unusually hot winter’s day, there was a dry berg wind. He was barefoot, filthy, with matted hair and dressed in ragged pants and a sleeveless hoodie, holding a R2 coin in his hand. What he wanted was a R5 so he could buy a cigarette. I didn’t have a R5 but I had some tobacco, so I rolled him a smoke and he wandered off, satisfied.

He was mild-mannered, with a pleasant face despite the dirt and matted hair, but there is little doubt his condition is at least partly due to suffering a mental illness and is someone Dr Sean Baumann may have treated during his 25 years of working as a clinical psychiatrist at Valkenberg, which is in walking distance from Maitland.

Having read Baumann’s book, Madness: Stories of Uncertainty and Hope, I also suspect that it will not be long before he is presented, possibly after being picked up by the police, at Valkenberg, or one of the three other psychiatric hospitals in Cape Town, for treatment, once again.

Baumann’s book, in which he reflects on the thousands of cases he’s dealt with over his career, also makes clear that to romanticise the man’s mild and forthright manner, is to be in danger of not recognising the grip of turmoil and fear mental illness holds over the lives of those it affects; the grip of terror that envelops a mind when the sense of self is lost, when the boundaries between identity and the surrounding world disappear and there is nothing but noise. How it can make a person so overwhelmed that they are not able to move or even talk. Or the shame of realising one tried to kill one’s mother after violently succumbing to a delusion over which one has no control.

He also addresses madness and its portrayal in theatre, madness and art, and the romance of madness. What is made abundantly clear is that, while there has to be hope that the illness can be managed through proper medication and care, mental illness is devastating. Particularly in a society such as ours which is so beset with poverty and social struggle, and along with that the link between mental illness and poverty. Being poor means support structures are undermined which means it more likely the patient will cease taking their medication which leads to the onset of symptoms which cause the destruction of relationships and property, which further undermines the social framework, sometimes leading to isolation and homelessness. And the affliction of mental illness is well-trodden path to poverty.

Admission to a psychiatric hospital is also not a long-term solution. The legion of mentally ill who lack suitable support structures cannot be housed indefinitely.

Baumann writes: “There is a constant pressure to discharge. The male acute service where I am a consultant comprises one hundred beds. There are about eighty to one hundred admissions a month, which means we need to maintain a constant throughput, to discharge in order to admit. Earlier in the day I was informed that there were over forty people on the waiting list.”

In the face of the many cases dealt with at the hospital on a daily basis, hope for a stable, safe, and meaningful life seems so impossible as to be a lie. The bare facts of the hundreds, if not thousands of cases brought to bear in this book, tells the scale of the tragedy.

Yet, Baumann does not let go the thread, however fragile, of hope, threading it through the pages with a delicate trace of poetry in places, and with exhausted determination where necessary.

The use of the term ‘Madness’ in the title is deliberate, although he recognises that “the notion of madness is problematic and controversial”.

“Part of the problem is terminology. ‘Madness’ is a folk term, it is outside the conservative domain of medicine, it is fraught with metaphors. It can seem casual and flippant, and so cause hurt. The word is used here deliberately but cautiously, and with a degree of anxiety that its use might be misinterpreted as provocative.”

However, he goes on to write: “The intention is in a way to reclaim madness, to change the way we think about madness and without being romantic or simply ignorant, to restore a degree of dignity and respect for these extreme states of mind.”

The intention is certainly achieved in this book. You will never think of madness in the same way.

Madness: Stories of Uncertainty and Hope, is published by Jonathan Ball Publishers and is available at The Book Lounge, cnr Roeland and Buitenkant Streets.