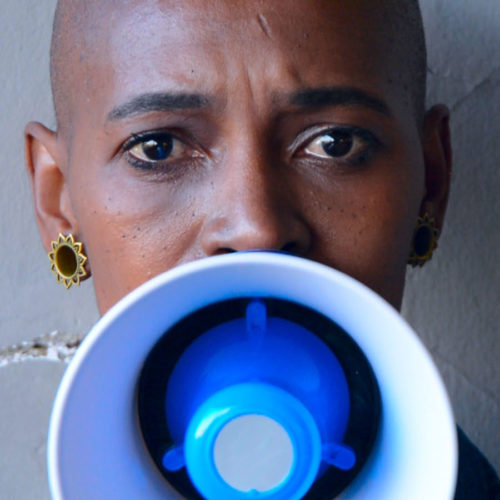 Have you ever known that something was wrong but still found yourself sitting on the fence? In the dearth of social media calls to protest, sometimes knowing that something needs to be done feels like a job for others to take on. Then, you click onto the second “day of amazing” on the Virtual National Arts Festival and you, yes, ‘You. You. You…’ are called to attention by an artist on a screen. And, it hits you. That, as Mamela Nyamza calls out injustice in the theatre industry, you could be complicit in choosing to be a bystander looking in from above the mess; looking through the safety of a fence. ‘Hayi. Hayi. Hayi. Hayi. Hayi…’ she repeats in guttural tones. My stomach contracts. It is not a wrong done to one womxn once, it is a repeated problem systematically undermining the dignity of womxn artists in the country: gatekeeping. ‘Yoh. Yoh. Yoh’, she makes a sound of disbelief.  ‘Rha. Sies. Phu!’, she spits on a sword held erect between her legs. With her legs open to reveal a patch of blood, the gendered nature of the problem and the protest are given profound artistic resonance.

Dressed in the protective clothing of the sport of fencing, Nyamza enacts the struggle of fighting to be both an activist and an artist, with the intersectional issues of being a womxn whose dignity is determined by masculinist notions of womxn’s silence and acquiescence. ‘Oh my God!’, she exclaims at the repeated accusations that she has tarnished the image of her workplace. ‘God. God. God…’ she repeats. Because the sense of godliness given to those who can hire and fire at whim is contested in the legal battle she stages.

It is a work filled with exclamations of protest. A stylistic aspect of Nyamza’s performance that runs through her repertoire and provides punctuating delight in the candor and humour of how she tackles social issues. ‘Hhe hhe hhe!!’, she laughs at another point. She laughs until her shoulders shake and she appears on the verge of a trance but, she pulls the performance in with uncanny control as an embodiment of how catharsis is not going to be had unless we continue to fight. She wields the sword again and walks up and down the same path.

Pest Control is a call to action. By the time the work ends, it is clear that what we have witnessed is not merely for our voyeuristic fulfilment – to know what happens inside of closed rooms – but to get off the fence and do something about the injustice we now intimately know.

The work is filmed and staged with effect. There are two spaces juxtaposed in the filmed performance. A dirt road – red with the sand of a Pretoria countryside. And a staged conference room – the set of the legal proceedings leveled against her. Significantly filmed on a stage with full lighting and smoke machines, the fait accompli is shown to be an orchestrated performance whose last act is to guarantee her acceptance of the coup; her silence. But the performance sees Nyamza standing atop the boardroom table with a megaphone and sword in her hand. The performer’s real-life refusal to be silenced is staged with the megaphone as a symbolic shield to her accompanying sword. The megaphone is rung, and she runs in circles on the table with its empty chairs. She runs and it becomes a physical theme. She runs repeatedly. And repetition plays a huge part in the piece as a whole. She rings the megaphone alarm and runs. The sense that this has happened before in other closed proceedings becomes part of the undertone of the scene. She is not the first nor the last. So, she runs in circles and runs on the spot. She blares the alarm again and again to the soundtrack of her own defense case. The details call attention to the need for due process. A need to address institutional accountability in the firing process.

Creatively, Nyamza towers over the staged case. She projects her performance on the red dirt road into the boardroom space. This makes the piece as a whole, a multi-layered commentary on performance itself. The fully masked Nyamza stands on a stage depicting a real-life staged event, the legal proceedings. She projects another Mamela, the artist who is the activist on trial in the room; the bleeding womxn whose protective gear is cut open at the knees and covered with red soil on the screen. The layers are a revelatory feat. They unravel the onion-peels of the event to great effect. Even the filming of the two sites, and their meeting point on the stage, is done through a wire-mesh so our perspective is clearly one of looking in from behind a protected space. The stage is also filmed from above, so we relate from the all-knowing perspective – like judges. The public space is filmed from below. There Nyamza stands above our view, as a womxn fighter. The fencing metaphor is used in layered ways as well. She is dressed as a fencer, but the protective gear reveals that hers is a defense position rather than an attack. When a recording of the event that put her on trial says, ‘We are empowering womxn but, at the same time we are not disempowering men’, it becomes clear that even in fighting for womxn’s rights, womxn must be on guard.

When I first read the title of Mamela Nyamza’s latest work Pest Control and heard the phrase “cleansing” (even as I know the ritual meaning used here), I worried about the connotations to ethnic genocide. But, she says, in her home-country, she has been made to feel like a pest. She has experienced the controlling mechanisms of a state institution which, when it couldn’t shut the gates to keep her out then attempted to fence her in. Fencing is played out in the removal of chairs around the table to be replaced with a fence. The bodies that the chairs represented become visible as symbolic gatekeeping entities. This is what the work deals with, under its unfortunate title. As a call to action, a work of protest, it is not the activity of controlling pests that we are called to. It is the need to see the violation of a person’s dignity and to get off our proverbial fence and act to change the treatment of womxn in the industry.

Like a Greek myth, Nyamza’s piece plays with the understanding that we already know the story. She was the Deputy Artistic Director of the South African State Theatre before her dismissal within a year of her tenure. She was vocal in her dissent at the lack of well-equipped platforms for womxn artists and she had billed the Vavasati Womxn’s Festival with the theme “Inequality: Seizing the Megaphone!” With these facts known, her work in the artistic rendering, is to unravel the details of how the story unfolded. She, then, in Nyamza’s potent way of revealing how the personal is political, further shows how the plot was staged.

Pest Control achieves something significant in this moment of the Covid pandemic and its isolation, which has resulted in the National Arts Festival being virtual in the first place. In the filmed medium, the work contrasts two sites as a disjuncture in the way the industry works with regard to the gendered space. The two spaces are filmed from contrasting points of view – above and below. By the end of the piece, the point of view is brought to our direct eyeline and Nyamza takes off her protective gear. Without the mask, she holds the megaphone in front of her naked face and looks right into the camera. It is a critical point of contact. The voice over repeats its last words: ‘Fix it. Fix it. Fix it.’ We are no longer seeing from above or below but, directly into the face of the person affected not just a protesting artist or activist in gear. In that long moment, seeing blinking, wet eyes, the screen almost dissolves and the body comes to the fore. It is a moment that solidifies this piece as one of the most exciting artistic possibilities for theatrical staging at this point in the virtual festival.

*But, then, it has a post-credit section… about as unnecessary as this post-article sentence.