Machismo is so passe. Activities such as bullfighting, drinking, arm wrestling, fishing are no longer to be revered, or be written about except in terms of irony or disapproval. It’s only natural. There has been too much blood and killing, conquest and destruction in a world teetering on the edge of annihilation. Too much of patriarchal capitalism raping the Earth’s natural resources for the last two centuries. Thus Hemingway, or at least what he is perceived to represent, is history. To admit being a fan is to risk being branded conservative, right wing, a throwback. Nurture, holism, empathy and understanding are what are needed to pull us back from the brink, off the rapacious path of climate chaos and on to the possibility of a future, not killing things.

Yet The Old Man and the Sea remains a classic tale. END_OF_DOCUMENT_TOKEN_TO_BE_REPLACED

Frustration with the City’s funding procedures and event permit policies have been expressed by a number of arts and culture organisations, with one internationally award-winning organisation having given up on trying to deal with local government bureaucracy.

Four significant organisations believe the City’s Events By-law is geared for large, well-funded and well-staffed organisations, and fails to acknowledge the challenges faced by smaller initiatives in the arts and culture sector.

Complaints include the cost of public display permits for advertising posters, opaque application procedures for grant-in-aid, and onerous and expensive event permit requirements.

Heal the Hood, a 20-year-old organisation using hip hop to develop a sense of self-worth among school children and young people living in suburbs of the Cape Flats, has simply given up trying to obtain funding from the City or organise their own events. END_OF_DOCUMENT_TOKEN_TO_BE_REPLACED

One liners and comments

Moonless: 99 red balloons meaninglessly invade the set. Shoot them down!

The Gospel According to Jan Coetzee: Matthew, Mark, Luke and Jan: Afrikaner wannabe Prophet, betrayed by his volk because he is too inclusive in his ministry of a freedom to doubt during Afrikaner Calvinism: Reza de Wet does Raiders (so many masterfully managed props.)

SA Media bunker: You stayed at home, missing the most dramatic media brunch ever. Brought the house down, almost.

Shortest review: The three-audience responses to It’s a Guy Thing: “It was shit.”

Still: Actor, plunged into darkness after taking too long to deliver  lines, bleats the last one into the abyss: “I love you!”

Kookalooks: Brendan and his friend come up with a killer marketing plan. An arrow through the top of the head.

Frogman: Australian version of a platana.

Umthombo: Paris fashion week eat your heart out – Share your secrets on how to fundraise.

Ja magazine called Critter “the old guard” but apologised for being ageist whippersnappers.

Metamorphosis: Life is long and painful enough; the show doses not have to be.

Climate chaos award: The Monument, for giving us a taste of the coming destruction of civilization as wind brings the roof down.

Paranoia award: Swarm Theory. Traffic officers had to be persuaded not to mace the actors which would have brought a sudden end to days, months, a lifetime of theoretical discussion. When it happened at the Village Green, umlungu festinoes thought the apocalypse had landed.

What Euros can buy award: Wanderer. Money lost in the frozen wasteland.

No need to worry award: I am Somebody – everyone loved you.

Jy’s cooler as ekka award, for a few 13-year-olds: No matter how rad or mind-blowing the show, you are still too cool to look up from your cellphone. That’s why you were seen on that big screen looking lame while everyone around you was rocking! It’s okay, we were there too, once.

Future imperfect award: Ersatz, or, the Descent of Man. The future man, half cyborg, living through a gaming virtual reality of violent destruction to finding a sweet, tender hominid in his paleontologist-described history. Great show.

Critter, leering at the Sunday programme, says: “Farewell to 10 days of amazing.” 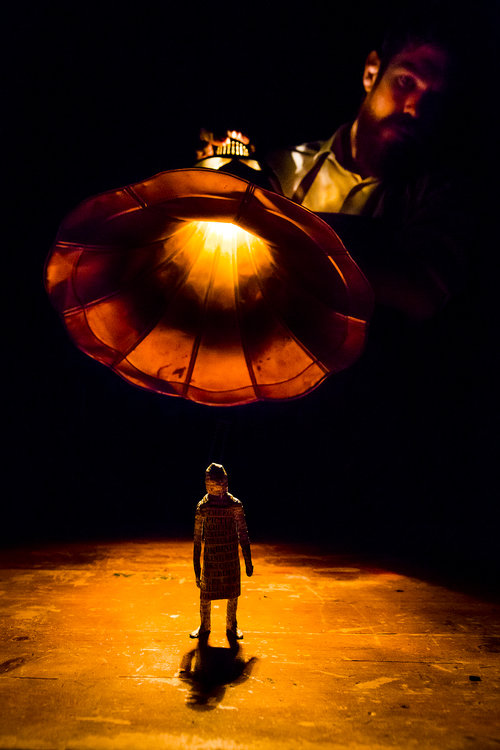 The power of a fairy tale is that good always triumphs.

No matter how many times you have to read the same story to your child their psyche needs the reassurance of safety provided by the story.

The Bookbinder’s apprentice is a hero’s journey is to heal the broken part of himself and the hole at the centre of the world.

His roasty, gruff English sets up this dark fairy tale set in an atmospheric, Dickensian shop.

In fact, turns out we are the apprentices on a mission to save the world – after we have torn it up and burned a hole in its heart.

The stagecraft, set, use of lighting, and musical soundtrack are subtle and exquisite.

The use of a pop-up book and shadow puppetry were lovely aesthetic storytelling devices and there could have been more.

The text is rich fable with well-placed humour which broke tension and mitigated the darkness.

We are all bookbinders needing to repair the horror of our ways. 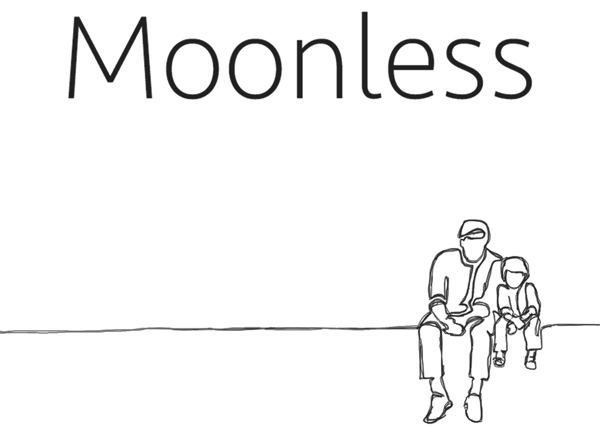 It’s strange to call a play involving the death of a child, suicide, and self-imposed isolation sweet.

But that’s the most apt description of Moonless, and it’s an ambiguous one. ‘Sweet’ is generally not a theatrical aspiration. Perhaps, given the subject matter in Moonless, this is quite an achievement, particularly as it is rather well-made.

Micia de Wet as the outsider artists (she sculpts) who chooses to cut herself off from society by refusing to speak and living as a hermit in the wilderness, is a magnetic performer who seems to have a natural bent for the physical demands of clowning. The set with its floor of loose paper sheets is intriguing, offering multiple possibilities, some of which are put to use.

The animated drawings projected on the back wall, and the moments of synchronisation with the performers draw our attention without overwhelming the stage despite the screen’s looming presence, and Gopala Davies as the grief-stricken father improves as he settles in to his role.

Yet Moonless fails to get below the surface. It has the substance of a reflection, its light fails to penetrate.

Puzzling over why this is, Occam’s razor leads me to the script. With one character mute, the lack of dialogue is an obstacle to poetic discourse and the revelation of deeper layers of character, but not an impassable one; clowning and non-verbal performance has the ability to reach deep into our emotional landscape and lead us into deep waters. Many artists have proven this.

Which brings us to the relationship between the grief-stricken man and the mute woman, the arc of which remains rather shallow. Although the impossible passes between them, they remain largely cut off from each other, preoccupied with their own despair, which is perhaps why I felt cut-off from them.

But what really keeps it at the level of ‘sweet’ despite all the elements in its favour, is the surfeit of whimsy, played out both in the storyline and the acting, and best symbolised by the large cluster of red helium-filled balloons taking up a significant corner of the stage. They do nothing, are not referred to and seem to only be there to look pretty. The only other possible reason for their inclusion – and this requires digging deeper than should be necessary – might be to signify the red horizon created by a never visible sun.

It is one line buried in the story revealing the geographical place the characters find themselves is the only one in the southern hemisphere that never sees the sun. A line pregnant with meaning but never further explored.

But seemingly superfluous balloons should not leave us feeling filled with little more than air.