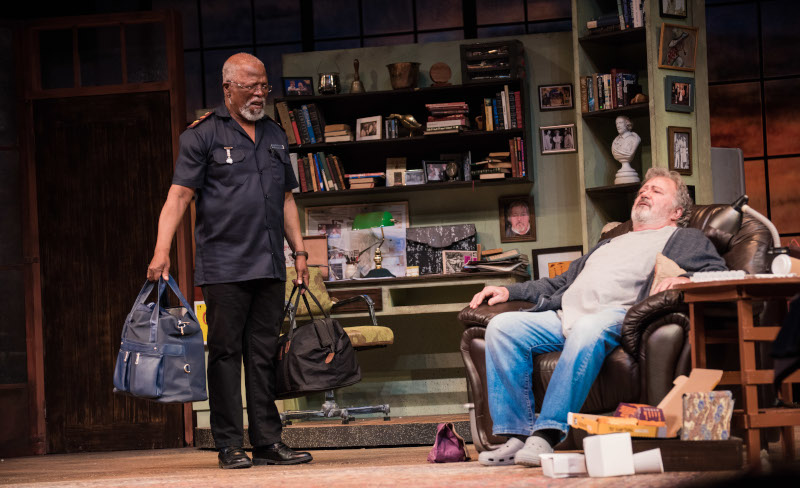 A once-grand Johannesburg living room, now scant and untidy. Dog-eared paperbacks and knick-knacks occupy the desk and shelves at the back of the room, as well as a miniature bust of Shakespeare. Fast-food containers and loose pages from scripts litter the foreground. Seated in a worn armchair is the aging stage actor Jack Morris (Michael Richard). A knock is heard at the door and the elderly care-worker Lunga Kunene (John Kani) enters, taking in his surroundings.

“Oh my god, you’ve been robbed!” he says immediately.
“No I haven’t,” Morris shoots back, “And I don’t intend to be. Get out of my house!”

It’s a sharp and biting exchange and, for a play that provokes and plays with the contemporary dynamics of race, class and language in South Africa, it’s the perfect opener. In Kunene and the King, penned by Kani and directed by Janice Honeyman, we are made to follow the simple and engaging story of a white South African actor, Morris (originally played by the late Anthony Sher), who has stage four liver cancer and is being guided through his final days by a live-in carer, the black male nurse Kunene. Morris only wants to stay alive long enough to play the upcoming role of King Lear in Cape Town. Kunene just wants to get the job done as painlessly and professionally as possible.

Of course, the socio-economic intricacies of past and present South Africa get in the way, colouring their actions and sentiments. Kunene, whose aspirations of becoming a doctor were waylaid early on as a result of the apartheid government, is nonetheless optimistic about the state of the country. Morris, who claims to be on the right side of history, is nonetheless ignorant and indifferent to the lives of black South Africans, his thinking divisive and fearful.

Over the course of the play, which takes place predominantly in Morris’ home – although slick set design and poetic musical interludes from Lungiswa Plaatjies are deployed as subtle markers of shifting time and place – the two keep each other occupied, albeit begrudgingly. They joke, bicker, swap stories about their respective childhoods and siloed ways of seeing one another (the phrase “you people” becomes something of a refrain).

Every now and then, Morris sneaks a swig from one of the many bottles of Gordon’s gin he’s got stashed around the place, while Kunene tries to pass the time as amicably as possible until his patient finally dies or, as he repeatedly puts it, “until you get better.” As with Lear, Morris goes a little mad, wanders through a Johannesburg summer storm and experiences life the way ‘everyday’ folks do, if only for the amount of time it takes to catch a taxi to Soweto.

Without the considered humour and generosity brought to the roles by Kani and Richard, Kunene and the King might be an entirely different play. Certainly, it’d be a far less effective one. Wrapped up in their quips or rants about contemporary culture and politics are earnest and profound musings on the ways in which South Africans relate to one another across the barriers of class, race and gender. The banter between the two is fast, funny and often-times acerbic. You laugh first, mull over the meaning of their exchanges later.

Still, while humour characterises so much of the performance, it is not the only thing animating its complex themes and narratives, and the play is punctuated by striking moments of tenderness and understanding.

In one such scene, Morris runs lines from King Lear. Kunene joins him and begins translating the work into isiZulu. They carry on in this fashion, line for line, until a dialogue emerges, a singular moment of translation and open-hearted conversation between two strangers trying to make sense of the same complicated country.

Kunene and the King ran at the Joburg Theatre from 29 May to 19 June and will tour to the Playhouse Theatre and Mandela Bay Theatre Complex in July 2022.