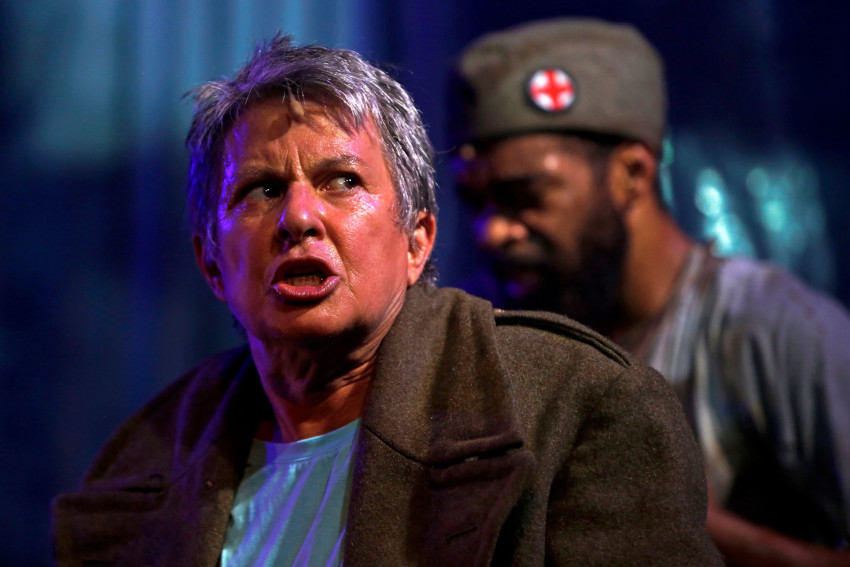 To take a young version of yourself – as a child, perhaps – and hold them. Just hold them, and say sorry. Therein lies the poetry within the sentimental postcard injunction to ‘forgive yourself’.

To do so redeems both the child and the adult. Yet how we resist being kind to the one person who has it completely within their power to not throw it back at us. This, surely, is the ultimate indicator of how we judge ourselves. That we do, begs the question of against what standards are we doing the judging? This could range from our own parents, across an abstract idea of societal expectations, to religion, or even an entirely idiosyncratic ideal which by virtue of its existence is compromised.

Actor Jennie Reznek doesn’t indicate which rulebook she expected herself to play by, but it doesn’t matter, because she turned around and forgave, the act of holding her past self enabling the letting go. Freedom, release, lightness, moving forward or at least moving, becoming unstuck. And part of that is throwing out the rule book, whatever it was.

It was one of the moments that saved, and gave meaning to her play, Snapped. Jennie conversing with a parallel version of herself (are our younger selves not still living their lives in parallel) projected hanging upside down on one of a number of translucent sheets suspended as if wings within the wings of the Baxter’s Flipside Theatre. Noticing her anguish, her blood-suffused face and painful ankles, and reaching out to her, and taking her down and cradling her to her breast. But almost distractedly, as if it was an act not so much considered as simply the step that had to be taken. One can’t just leave a person hanging, especially when you’re the only one with the ability to cut her down. It’s as if this moment cannot be forced, arrived at with a self-awareness programme. As Jennie depicts it, it is a moment that you come across, at some stage, yet everything that has gone before has led you there. Much like, I suppose, the resolution of grief.

For grief is what Snapped is about. In this case, grief for a dead father. Fifteen years, says Jennie in the writer’s note on the programme. Fifteen years, she says, numerous times in her play. Fifteen years of being stuck in grief; this play being the lever to roll the boulder.

As writer she is clear about this: “Making this work was part of the process of getting unstuck.” There is no doubt this play is personal, and Jennie’s psyche, it seems, is messy. Layered, might be a more polite way of saying it.

There are a lot of layers on stage: Floor-to-ceiling translucent plastic sheets receding upstage on either side; three receding sections on the stage – two divided by a fallen tree and a stage upon the stage toward the back; characters, or a character whose role is obscure, and an omniscient crew member whose manipulation of the set is a gesture to the hand of God; meta theatre; Visual projections speeding at 24 frames per second across it all some of the time and a section of it most of the time; Scenes ranging from large and expansive to small and contained.

It was the small and contained, ironically, that had the most impact, when Jennie was able to pull into herself and pull us in with her. Partly perhaps because they were welcome breaks from the otherwise frenetic, loud ranting and despair.

Much of this kept me at a distance, detached, all being too much to absorb. With everything going on at once I was never sure where to look, flicking between stage and screen and missing everything in between so that after awhile I stopped looking. It got to the point of being an assault on the senses. Artaud would’ve approved.

Which is to say, despite the poetry within the play, including the inspiration of her father’s World War II stretcher bearer as an infernal guide played by Carlo Daniels, and the contributions by eminent artists such as sound designer and composer Neo Muyanga, and director Mark Fleishman, Snapped was a difficult play to experience.

Making sense of it was a struggle and it was in many ways ugly. Grief is rarely pretty. I found it too busy, too large, too loud, too much thrown at it, the constant flicker of images distracting. At the same time the people involved – Jennie, Mark, Neo, designer Craig Leo, videographer Kirsti Cumming, choreographer Ina Wichterich – are all too experienced to create a failure. Yet nobody hits the mark all the time, and usually not all together. The moments of clarity, of synthesis, were too few for me to offer acclamation. But despite the struggle, even those handful of moments were worth the price.

Snapped runs at the Baxter Flipside from 16 September to 2 October 2021, at 7pm and Saturday matinees at 2pm. Ticket prices are R65 (for schools), R120 for the Early Bird special and R150 throughout. There is an age restriction of 13 years.

Photograph of Jennie Reznek and Carlo Daniels in Snapped taken by Mark Wessels.