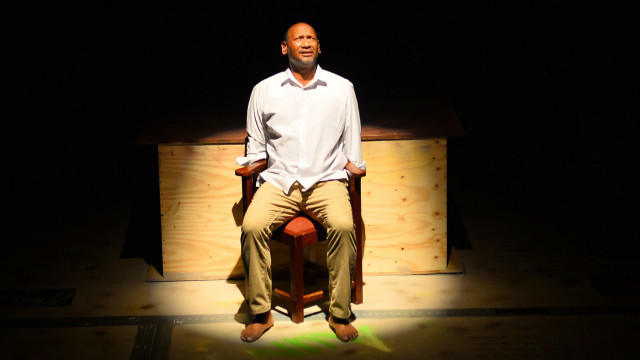 Paying tribute to the life and work of the late South African author, activist, and poet Chris van Wyk is no simple task, but who better to embody his words, his wit, his resounding laughter than Zane Meas?

Meas, who also grew up in Riverlea and who most will recognise from local television through his roles in 7de Laan, Scandal!, and Isidingo, got his first taste of the acting life through the writings of Van Wyk.

Back when he was in Matric, Meas adapted the author’s short story Flats into a staged work. The performance earned him his first award, motivating him to pursue a career in acting. Years later, he’d play the author himself in the Janice Honeyman production of Shirley, Goodness and Mercy, after Van Wyk’s 2004 memoir by the same name. Now, Meas returns to the stage with his own tribute to the Riverlea writer.

In Van Wyk, Storyteller of Riverlea, Meas and director Christo Davids (who also played Van Wyk in Shirley, Goodness and Mercy) manage to work a decent amount of the author’s poems, prose, and anecdotes into the hour-long play.

They do this by cutting to the chase. When the stage comes alive, we meet Van Wyk after he has left the world, but caught in a space that’s “somewhere between here and there”. Van Wyk is seated in a chair, arms behind him, reciting a few lines from his poem Many Men Have Never Cried. The scene suggests that of an interrogation room.

Van Wyk looks around, clocks his surroundings, and laughs. “You mean to tell me you even have interrogation in this place?”

It’s a great way to open the play, to introduce the audience to the character of Van Wyk – a writer who possessed the rare ability to translate history, place, and humanity so simply, effectively, and humorously through writing.

“I come from Riverlea!” he announces proudly, and the rest of the stage lights up, revealing a black and white grid bearing the street names and stories of the small Johannesburg township in which he grew up, and which he wrote about, prolifically. Behind him, an oversized book doubles up as a screen for the projection of choice text and imagery. Hanging from wires and coat hangers are loose pages and paperbacks, a rich, textual world made tangible.

From here, Meas journeys through key moments and texts from Van Wyk’s life. There is the genesis of his love for writing – comic books, tales told by his mother, the biblical theatrics of his schoolteacher, and neighbourhood skinder heard through paper-thin walls (“so thin, your neighbours can hear you change your mind”, Van Wyk writes in his second memoir Eggs to Lay, Chickens to Hatch). Then there is his political awakening, his adolescent crushes, his run-ins with the apartheid police, his last few days in hospital. Mostly, they are remarkably ordinary stories that speak to the everyday lives of the people Van Wyk grew up with, sometimes sad, sometimes outrageous, but always told with profound insight, empathy, and with a broader view of the social conditions at play.

The script is a collage of words and scenes from both of Van Wyk’s memoirs, his poems, as well as a reprised performance of Flats. Meas embodies the texts, brilliantly. He is warm, wry, wonderfully sincere. At times, he abandons lines, trips up his own sentences. This is no mistake. Rather, it can be seen as a reflection of Van Wyk’s own style, so caught up in the joy of storytelling that a chapter can begin with the memory of a day spent playing in the yellow dust of the mine dumps, and veer off into an aside about the antics and temperament of the neighbour’s dog, before ending on the underlying social contracts one enters into when asked to run to the corner store for a loose onion and a packet of cigarettes.

Meas also weaves in and out of poems and prose, seamlessly. A reading of I have my father’s voice is merged with The Ballot and the Bullet, while Candle transitions into My mother’s laughter to brilliant ends. Standalone texts such as Dear Poppetjie – an incisive piece penned in response to a crass and unthinking newspaper column – as well as Portrait, a poem for Van Wyk’s wife Kathy, and his famous account of apartheid-era police brutality In Detention are stand-out performances.

The performance does not provide a full account of Van Wyk’s life and work. How could it? There is too much to tell: his first poems published in The Star, his children’s books, novels, poetry collections. The Ravan Press years, Staffrider, his early literary journal Wietie, the whole generations of readers and writers he has influenced. Such is the legacy of Van Wyk – a rich and enduring collection of words, stories, and endless amounts of laughter, despite it all.

What Meas and the team behind Van Wyk, Storyteller of Riverlea manage to do, vividly, is extract and make tangible some of the key moments and texts that contribute to this legacy. It is a brief and sweeping portrayal that finds its success in harnessing the great pleasure, sadness, and the unfailing warmth of Van Wyk’s words.