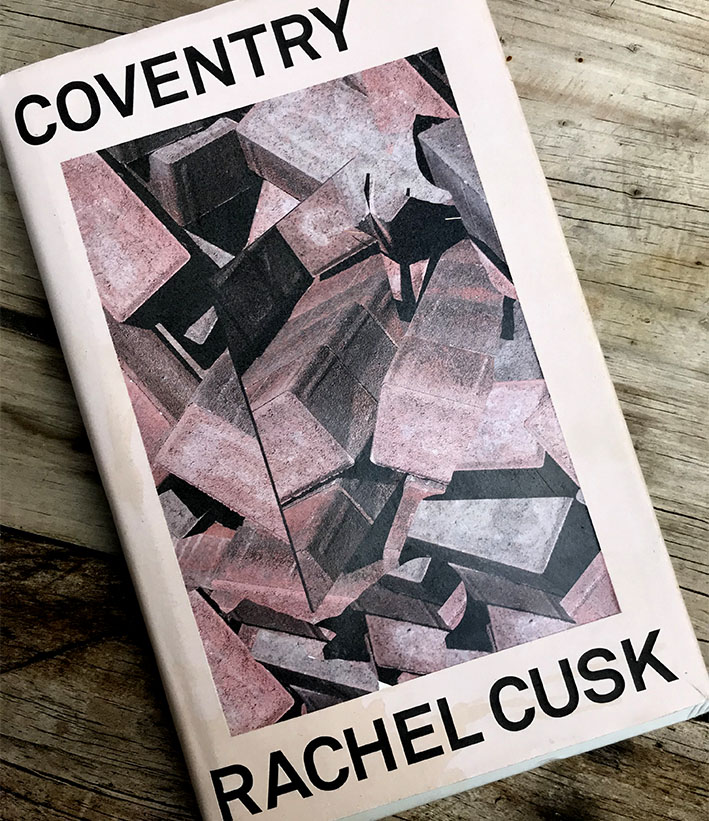 There seems to be no local version of ‘being sent to Coventry’. There may well be distinct versions of it in other cultures but it is largely accepted as a particularly English saying, and it does typify a particular trait of Englishness. I could as easily say, there may well be no other culture that displays the particular social practice of sending someone to Coventry. At least, not to the extent they have a saying for it.

It speaks, I would hazard, to an unwillingness to engage in direct confrontation, an underlying passive aggression, war by attrition. It emerges from a misplaced sense of manners; one does not wish to cause a scene, but one must still have one’s way.

It is the most passive of aggressions. So passive that, as Rachel Cusk states in her collection of absorbing essays – brimming with pithy observation, wit, and at times delightful iconoclasm – nobody even tells you you’ve been sent to Coventry. It is a slow process, like the receding of a tide, largely unnoticed until the realisation of your social isolation dawns. It is equally difficult to accurately trace the exact cause.

Cusk muses on this very peculiar aspect of social relations in her second essay in this collection, which also provides its title. The first essay is about driving, a subject on which she gives pause for thought as she considers what it signifies to consciously choose not to learn to drive; how the lack of what might be argued an unnatural freedom determines our lives are by necessity more contained, manageable, in a sense, neater, and less wasteful. This theory also presumes one’s ability to live close to one’s work or, ideally, to live and work in the same place. To suggest to the domestic worker in Khayelitsha who has to negotiate the anarchy of minibus taxis and failing public transport that her lack of an automobile is a positive attribute would be insulting in its arrogance. But Cusk is English, and she’s considering England, not South Africa.

If you can accept that, and in any way appreciate the understatement that defines English wit (in contrast to the American penchant for slapstick), you’re likely to derive great pleasure from the way Cusk thinks, particularly in the six essays that are collected as the first part of the book. Here she also considers rudeness, teenagers (her own), divorce, and home making, in which she offers such diamonds as the following:

Noting that in the “moderately grand” houses she grew up in, the best rooms were always the ones least used – the drawing room with its “dustless ornaments”, the spare bedroom where the “white bed sheets were always crisp and clean”, the study with its “unread leather-bound volumes” – she muses that “In their way these rooms were expressive works, attempts to perfect reality and hold it in an eternal moment. They told me something about the person – my mother – who created them. What they seemed to suggest was that she would never be happier than in the home she made for us, at the times when we weren’t there.”

For anyone who has grown up in a family that, if not wealthy enough to realise the perfect room only ever created for the external gaze, at least aspired to it, the insight is devastating. It is also liberating, and comic in that it makes clear the ridiculousness of the assumption that we structure the spaces we inhabit to please an unknown and unknowable standard that is not ours.

What is particularly attractive is that Cusk does not produce statements such as these as definite. Unlike Alain de Botton, say, whose philosophical musings reach a denouement, Cusk produces them as a sort of by-product of a conversation with herself, to which we as reader are invited to participate. She freely considers other possibilities; that yes, things can also be viewed in a different light.

Besides the glades and views she leads us to, there is also the fascination of seeming to being privy to how her thoughts unfold, how her mind works. Which is a deceit, of course. What is written is carefully chosen, likely to have been edited, rewritten and re-edited. The art is in making it appear so natural, for the logical progression leads to unexpected places yet is incredibly pleasing in its tidiness.

The second part of the book departs from considering the personal, and moves to considering work by the artist Louise Bourgeois, Catholicism, ‘women’s writing’ (as opposed to writing), and creative writing courses, all of which provide new, or deeper, insight.

The last section comprises what might better be described as reviews, although reviews which have the depth and form of the essay. How much you enjoy these depends on whether you are familiar with the novels she’s writing about. I’m slightly ashamed to say I have not read any of the seven she covers, except perhaps D.H. Lawrence’s The Rainbow but if I have read it is so far in the past I can no longer remember. However, I would gladly take the time to read them merely to come back to Cusk and re-read what she had to say.

One exception is Elizabeth Gilbert’s memoir Eat, Pray, Love, which spawned the movie by the same name. I haven’t read the book, and having had the misfortune of watching the movie, don’t plan to. In any event, I have Cusk’s wonderfully dry and considered critique, which by its very thoughtfulness, eviscerates the thoughtlessness of Gilbert’s bestseller. If you, too, hated Eat, Pray, Love, perhaps for reasons you didn’t take the time to fully understand, you will also fall in love with Cusk, who, like with all other matters she chooses to write about, takes the time, and gets to the bottom of things.