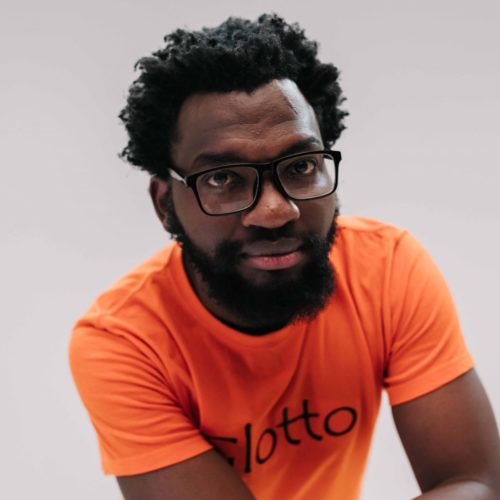 J.Bobs sticks his hand in and pulls the whole thing inside out.

‘Can’t you sing along to my catchy sing-along?’

He starts with the choral, the blues wail of the mine and the field and kicks it bhoboza, slamming us straight into now by slipping the rural patriarchy onto the downtown street outside.

‘Get my shallow on.’

The entire first chapter rips into contemporary consumer culture. The toxic stew of hype, advertising, instagram; our idolisation of the image is lampooned. Mercilessly. Which marks the line where Jefferson Tshabalala struts into performance art. He plays loose with the concept of theatre, yet theatre it is.

The hoodie tracksuits, the instagram account, the suitcase, prominently displayed on its own altar in what looks to be the rehearsal studios at The Market Theatre Laboratory.

What you gonna do? ‘Make a video.’

‘No cameras, no tapes, if I’m not in my dapper drapes’. If you follow J.Bobs on Insta you’ll totally get this. ‘Seen pha kwa’ Mzansi. The pink suitcase at the airports, the selfies and the self-promotion are all a character. The over-play is deliberate. Deliberately, and entirely ironic.

From ‘swagga ovaloada’ to ‘can I get a holla’, Jefferson slices into the bullshit we buy into and holds it glistening in the light where we see its emptiness. It’s the same light that glares on him; the entire production is exposed to our gaze as he lays us a language you can’t find in an urban dictionary.

And then we click on Chapter 2, Location Lekeyshini Lokasie (there are five chapters).

The exhilaratingly caustic rap, brilliant beatboxing and harmonising by the accompanying cast of Kwasha Theatre Company members who are right in the ride with Simphiwe ‘Beatz’ Bonongo at the wheel, opens the show. It’s the game show. A J.Bobs special, only here with no live audience it’s the technical crew whose knowledge of township street lingo is put to the test.

Fair enough, it’s an entertaining 18 minutes of finger-on-the-pulse South African-ness, throwing Alex across the bridge into Sandton, and back.

This is a theme that bleeds into Chapter 3 – Victor and the Venacs! (To Mogodu or To Haggis – That is the Conundrum) where we have the players reading a scene in which six young black writers are working under an indescribably delusional white guy. It is excruciating because it is so on the money you want to offer Joël Leonard a manly side-hug for being the sacrificial lamb. (Is it white solidarity or humane empathy?)

We move through more of that in Victor and the Venacs (Kale Tuesday) but immediately the sound lets the show down. Really not good, amateur, the mics not working, we’re listening to what’s being picked up on the cellphone vid. Still, we we’re invested enough to turn up the volume and focus through. Years of perching at the back of an unheated hall in a Makhanda winter has steeled us for the necessary stamina. We’re also at this point thinking: ‘off book would be nice.’

But no, there is no acting here. It is a badly recorded 12-minute staged reading of cutting and disturbing text laying bare the worst of blind racism and sexism our society has to offer.

Which leads us swiftly to Chapter 5 – The J.Bobs Let’s Play Texts! (Of Prose. Of Poems. Of Plays) – where the young theatremakers J.Bobs has chosen to work with for this Standard Bank Young Artist production come into their own with monologues that give us a clear view of what it is Jefferson has to say, providing some thrilling acting; the ‘Make Magic’ monologue a gem of a manifesto and ‘iStoko’ a scathing reposte to male arrogance that channels Nina Simone’s Four Women from the depths. But when it gets to repetition, it’s time to cut, after that it’s just improv, and that’s not what we came here for.

Taken as a whole, the five parts, with their repetition of intros and outros, their disparate quality and occasional, yes, well, sketchiness, provide less than the sum of its parts. There’s too much thrown into the pot, too quickly.

Yet: Whatever township street culture I’m tuned into is about 30 years old from the Vaal Triangle and was mostly maplaas to begin with. I have no place tuning if J.Bobs is genius or not. But whatever he’s tapped into and tapping out, it’s electrifying. It’s got energy and it’s got style and it’s got no fucks to give. J.Bobs makes no excuses and what he does here is take the SBYA budget and resources, and writes and plays with young exciting people who get where he’s at. He pulls it all apart. The whole thing, the whole setup. He turns it on its head so that the bad sound, the amateurism, can, if you argue hard enough for it, become part of it. The concept can hold, just throw in enough swagger. After all, you got a videeeo. Which means I’m contradicting myself.

But also, eish! A good editor, you know. The right one: beat up and tuned in and taking no prisoners. I want to see that version with the shit cut out and grabbing me by the lapels. ‘Cause you know J.Bobs, he coulda just left off at Chapter 1, I would’ve been happy. Pha!