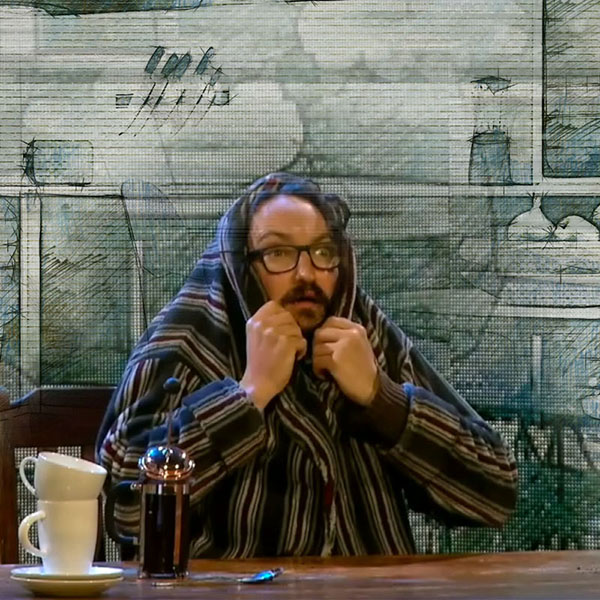 What appears to be a reflective, melodramatic drama about the angst of childhood accidents and tragedies, Garry’s Retreat turns out to resemble something out of a Stephen King novel.

“A short play about a little boy, an astronaut and life” led me to believe it was about the power of imagination to create alternative realities.

Garry’s Retreat – Written by Saul Kemack and directed by Daniel Keith Geddes – is set in an ordinary kitchen where Garry, while making what seems to be at least his third cup of coffee, shares the story of a little boy. Despite having written and constantly reviewing the detailed pages of the tale, Garry attempts to share this story with us. The boy’s story, which may or may not be his own, contains peculiar thoughts of events involving blood and death and an ominous astronaut.

We discover how this little boy was almost suffocated by an astronaut after his mother is locked out of the kitchen, how he developed his fear of water and how he discovered a body while playing in the sand on a Durban beach. Can a child’s viewpoint warp one’s own view of reality?

Garry is brought to brilliant life by William Harding, who provides an exceptional performance of a seemingly psychologically disturbed man, easily diverted from the conversation at hand. It felt as if I was being singled out during the performance for “getting bored” as Garry stared and pointed directly at me. But he is wrong, I was spellbound for the full 24 minutes.

As the virtual curtain draws to a close, Garry’s statement echoes in my mind: “We have so little control over how accidents happen, in the same way that we remember things.”

Even if we are witness to events, is that enough to prove that our account is truthful?

Garry’s Retreat is on the National Arts Festival vFringe programme. Find it here.