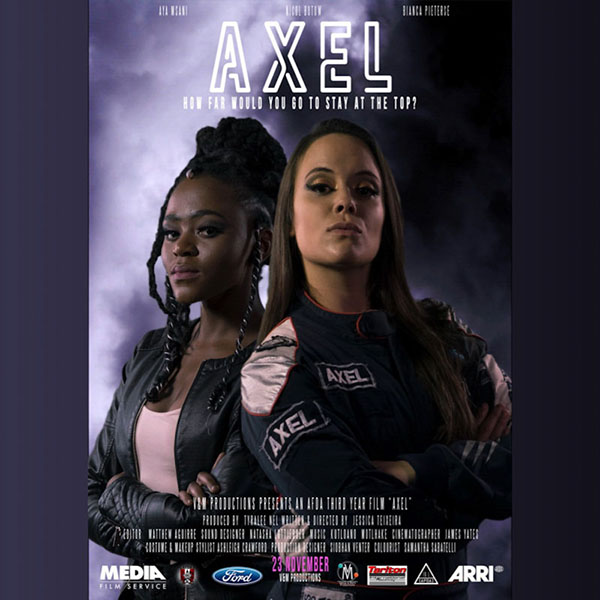 Jealousy is a disease. It seeps in under your skin unexpectedly, writhes around until ultimately, its flag hoisted, your brain its territory. Once colonised, the sickness spreads ’till all you feel is a pumping, aching envy that contaminates your every thought, action, and idea, saturating them with a sickly green hue.

The underbelly of jealousy is explored in Jessica Teixeira’s film Axel. Pitting women against each other is depicted often enough in films to be a trope, and it is one Teixeira falls into, as if two women can’t be in the same field and get along. Perhaps that’s a societal problem, rather than the film’s.

In this short feature the backdrop is asphalt, and the career is drag racing. Axel, played by Bianca Pieterse, is a drag racing superstar and has reigned supreme for several years. Along comes new racer Mags, played by Aya Msani. Axel’s confidence takes a knock and the seed of envy is planted.

The film depicts a silent rage, stemming from insecurity and fear as Axel’s crown and throne threatens to drift away like the smoke of her exhaust pipe. Meanwhile Mags simply sees a woman she admires and aspires to emulate, but the praise she showers on her heroine only acts as a reminder of her declining popularity.

The fiction of Axel drips into our reality. Women are forced to work twice as hard to get half the glory men obtain, forcing them be rivals rather than collaborators, or even engage in jocular competition. The jealousy that plagues Axel reflects the pressure of the environment she is in.

In the end, the monster Axel becomes pulls the mask off a vile and corrupt society.