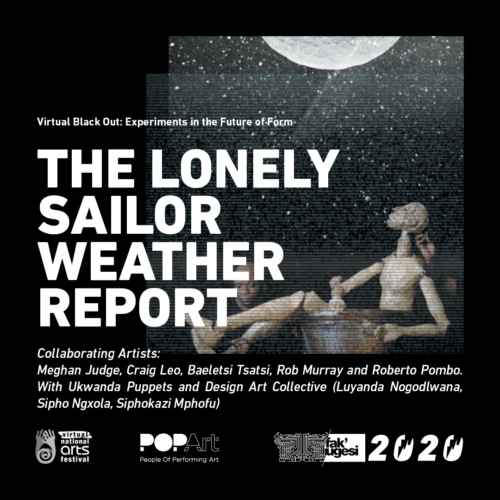 For Day 7 of #vNAF I hit up Virtual Blackout: Experiments in the Future of Form.

What a ride! It’s like getting to visit masters playing. Imagine your favourite creative with Lego or putty in their hands; just putting things in their hands to see what they make… Fun and also quite out there. Wild.

And They Wanted to Contain the Collapse is a trippy piece. It’s so crazy I’m thrilled by the madness. The work is like a collage of some of the maddening ways our minds have had to sift through thoughts during months of lockdown. Gerard Bester holds a depressing performance that even when he tries to dance feels without its joy. The cutting and pasting and oddities of background give a nod to the weird worlds we occupy online. And how we toyi-toyi in each other’s heads with every new cyber protest. A lot. Strange. A fascinating collapse of normal in visuals.

My Many Mouths is only a teaser of the work. A too tiny taste. It’s supposed to come out at a later, unknown date. On that note: Andizi.

Neighbours is just fucken fantastic. I didn’t realise how much I needed a laugh until I watched these two cute clowns on either side of a wall!

Liezl de Kock and Mongiwekhaya are stuck in their flats in a flat world! Talk about flattening the curve – they exist in a world of 2-dimensional paper cut-outs and are the classic story of bad neighbours. In cutesy physical comedy. They annoy each other through the shared wall until, without ever seeing each other, they find a common sound. Then their hearts open up to a delightful 2-d animated world.

If I sound like a granny, then that’s the feeling. Warm. Like cosying up to your grannies chest to hear her laugh.

After that, I swam into the malaise of The Lonely Sailor Weather Report.

*I want to write a breath into this text*

What a delicate piece of craft…

*I’m breathing softly in and out*

A puppet is wafted through a cybernetic world in search for something that I can’t even name. Yet, it feels like whatever we may be looking for as we swim through news and feelings we’ve never felt before. A rest perhaps? A new way? A new world? The sailor is lonely, floating in a cyberspace created by digital stars and techno waves. The episodic videos of The Lonely Sailor Weather Report loop so that, in every episode, this sailor’s soul seems stuck in their seamless search among stars; for company.

The puppeteers are magnificent when they appear to disappear even as you know they are still there.

*Another breath. And another*

Tenderly, at one time, the puppet just breathes and breathes. It’s so audible you become aware that you too need to breathe more deeply to wade through your own corona news haze.

When the puppet rests its long-traveling head, it’s deeply satisfying. But, then the puppet gets swallowed into cyberspace and fades away.

No easy endings. Not yet. But, what a breath of fresh air is this version of the weather report of our current strange and isolated lives.

The last work on the Virtual Blackout is called When This is Over. It’s an apt title.

When This is Over is also a teaser, so I don’t know how much more of what is currently online, for the opening of the VB series, will make up the entire piece. It is difficult to speak back to in this case. But, I enjoyed listening to the lengthy teaser’s mesh of poetry and the mundane-as-poetic. It’s got an easy combination of tones so the texture feels like hearing a phone call between old artistic friends and their musings about this time, the things they’re watching, their relationships, and thoughts about life. All in a swirl of creamy, easy voices without pretension, yet quite poetic.

Virtual Blackout: Experiments in the Future of Form easily plays between the future we are trying to understand as we create, and the present we are still struggling to navigate. It does so with such hearty play that it makes the future feel like another open field in which to play.