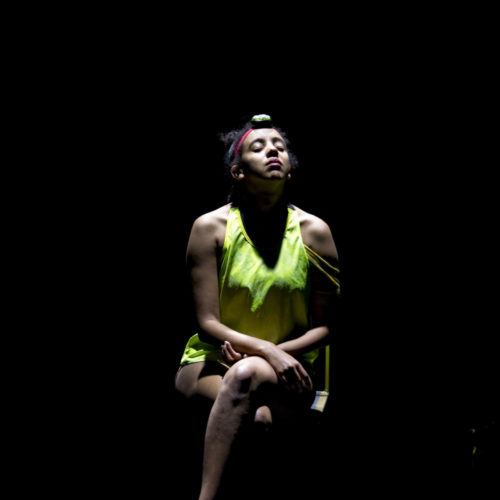 Your chest is cracked open, the person digs their way into the depths of you, gouges a souvenir chunk of your heart, and skips away leaving a monstrous, festering cavity.

And that’s when it’s not messy.

Which elixirs we choose to doctor the debilitating emptiness and how we revive ourselves to our former state of healthy wholeness… provides self-insight like nothing else. Here, truly, is applicable the phrase “each to their own”. You just do whatcha gotta do to get through.

Swan Song’s protagonist (Buhle Ngaba) is apparently just doing her thing too. We’re brought into a young woman’s story of experiencing a breakup. When we first encounter the jaded eyes and her sardonic, raw recitations on life, too weary to wipe the spilled Heinz soup off her chin… the instinct is to tuck her under your wing and nurture her.

But she’s defiant too. Determined to pick at the scars until the truth seeps out. Flitting between memories, she (and we) piece together the fragments that’ve made this woman who she is. The older the memory, the thicker the scar, the tougher the excavation.

Communal bath time. Exposure and humiliation in front of judging eyes. Why are you different, hey? Church time. The bible’s lessons. Sin, sin, sin. Shame, shame, shame. Love and acceptance aren’t human rights, they’re earned in exchange for obedience and blind trust. TV time. Fake drivel packaged as reality and sold as a dream. TV: capitalism’s machine gun. If you’re not Striving For Success what are you doing with your life?

When she turns the mirror towards us, bright light illuminating the space between us – are we proud or nervous of what could be exposed?

Remember, the personal is political and the political is personal, and metaphor is stitched into the fabric of Swan Song.

Black mother, white father with “his jungle fever”, created this being. Born with winged scapula. Come puberty, oh happy days; all that Body Business becomes a mush and slush of finding your identity.

From multifarious angles, she’s taught to be ashamed of her biology, her body, that which is her physical presence. Through all the crap she manages to build confidence. Claiming space is important. Belonging is important. Yet there are those who don’t accept other bodies when they’re unlike their own. Who see difference as something to be corrected and an opportunity to brandish their intervention-whip under the guise of care and concern. Enter boyfriend Oliver to help her ‘fix’ herself. But what are the costs?

Her body is ‘fixed’. Her wings are clipped. Now straightened. Now back in line.

The metaphors are subtle. Because our concern is focussed on the fragile soul in front of us, smearing her lipstick again, swatting away the ever-present buzz of the flies, baring her inner world moment-to-moment, we’re only hit once it’s all over.

It was not her body that was deformed. It was those made uncomfortable by The Other whose skewed views need untwisting.

A deeper read: so many white knights playing rescuer. So many ‘if it weren’t for XYZ so & so would never have made it out of the township’ narratives. Against all odds! But the wings have already been torn from the fly so must he just slowly die? Wild ideal: imagine if we changed the odds, deconstructed the system just a little so people could stop being bent to breaking point.

We’ve reached the brink. She is unhinged but still loosely wearing her pointe shoes; yet another cage created for the purpose of re-shaping what’s natural. She grips at the vestiges of what she was before the world got hold of her. Like Swan Lake there’s tragedy here. Like Black Swan, there’s a dark exposing of the destruction and folly and risk in striving for a perfection, an ideal, that cannot exist.

Although previously staged as a live performance, at the vNAF we’re not watching a recording. The artists have reformulated the work for film. Combining an awesomely unsettling soundscape and soundtrack with unnerving filming tactics (coming in and out of focus, uncomfortably in-yer-face close ups) with a super-slick cut and edit, they’ve created an edgy production. The gripping filming style reflects Ngaba’s brutally vulnerable performance. It makes for a winning work.