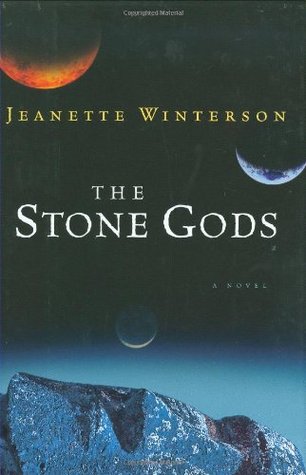 If books are to be judged on their first sentence, Jeanette Winterson’s The Stone Gods wins all the prizes.

This new world weighs a yatto-gram.

At first I considered it a silly idea, the first-sentence judgement. Absurd to form an opinion on an entire novel from the first handful of words. But I can see its truth.

There is a catch, though. You can only judge the worth of the first sentence after you’ve read the book.

For that opening line, if it is brilliant, hold tens of thousand of words in its palm. And there is no way to know if it does that, unless you measure the pile. Only then, when you come back to the beginning, is it possible to see how it cups the ending.

Having read The Stone Gods, each one of those six words now carry the weight of the world. Together, they carry the power of a meteorite, inter-stellar travel, the possibility of the impossible, the germ of our own destruction.

I have a new theory: the success of the novel is its ability, having being read, to turn its first sentence into an intricate dance of poetry and philosophy.

There’s the fact we’re living through a pandemic. A virus is sweeping through the global human population, and we have no cure, no antidote, no vaccine. A novel virus come about, ultimately, through destruction of our own planet. Destruction that at times seems wanton; of habitats, of species, of entire ecosystems in order to feed a greed that cannot be sated. Greed destroying natural balances that would limit exposure and spread, would keep things in their lane.

But homo sapiens is not good at staying in the lane. The whole point of evolution is to get out of your lane. And we’re the most evolved, arguably.

The difficult thing is, there’s just too many of us. We are too many of one dominant species. A planet full of apex predators. Yes, if managed properly and on holistic principles, all eight billion of us and counting could be fed and watered and housed but we are also gregarious and congregate in cities that become metropolisis. This requires complex systems, and the more complex the system, the more precarious it becomes. A submicroscopic bundle of DNA is able to bring us to our knees.

Whatever your view on the politics of overpopulation, we’ve run out of world. We need a new one. Imagine we found one, one that weighs a yatto-gram.

There was no conscious intention to read a novel that in any way reflects the extra-ordinary situation our world is in (though it was no less extra-ordinary a year ago, we just weren’t personally affected). I had no desire to read Camus’s The Plague while enduring one. If anything, I was seeking literature to take me away from the incessant scroll of Covid-19 information. Yet if I had sought a novel through which to find perspective, I doubt there could be any better than The Stone Gods.

It didn’t take many pages before the novel became a mirror in which I stared at humanity, but as if from the other side. The unflinching clarity of Winterson’s vision, the crisp sensuality of her writing, created the uncanny feeling of being the reflection, of looking through myself and seeing the cosmic dust of our cells, pulsating nearer and nearer to each other on their insatiable journey to form new life.

Published in 2007, there is nothing of plague or disease in it, except for that resulting from nuclear fallout, but one imagines it exists, just a spore release away, in Winterson’s world, or worlds.

Her novel is made up of three inter-connected novellas: Planet Blue, Easter Island, and Post-3 War.

A trilogy, although triptych is more apt. Each is complete in itself, but link and echo through characters and themes, each supporting the other to create a narrative circle.

To provide any further information about these three parts is to risk spoiling the work, except to say they link beginning to end, end to beginning; an ouroboros encircling a hundred million years and all the galaxies between them.