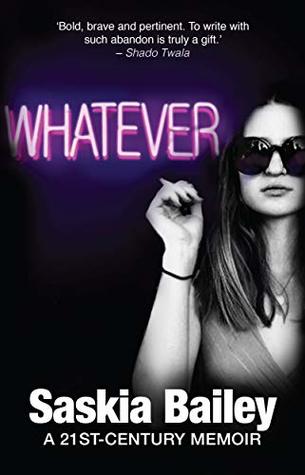 The daughter of eccentric artist parents and the granddaughter of DRUM founder Jim Bailey, Saskia Bailey grows up in an extraordinary home where a train station of wildly interesting guests formed the wallpaper of her childhood.

Earlier this year 21-year-old Saskia Bailey weighted South Africa’s book shelves with the release of her debut novel: Whatever: A 21st Century Memoir. Recounting harrowing stories of sex, drugs, death and eating disorders, Bailey writes about her experiences in an honest and brutal tone. She wants her readers to feel uncomfortable, yet keep them curious.

“I would like you to take Whatever not with a pinch, but a bucket of salt.”- writes Baily in her preface.

At the start of the book Bailey sets up a figurative contract with her readers. Her preface eludes to the fact that this book is a space to tell her story, her memories, and to have the opportunity to share her experiences growing up as a privileged, white South African girl. Bailey wants her reader to prepare for the shocking truths that lie ahead, but also doesn’t want her stories to be taken too seriously. Which makes her request feel incongruent to the theme of her memoir.

Following the preface are 30 fragmented chapters with nuclear storylines and themes. Although the chapters were short and packed with plenty of experiences, there was no relativity between each chapter. An example can be seen as Chapter 2, which addresses the theme of death, shifts abruptly to entertaining her father’s guests in Chapter 3. As shift that does not give the reader time to unpack the previous chapter.

What lacked throughout Whatever was self-reflection and character development. Bailey may have wanted this to just be a recount of her life so far, but her voice often felt lost in the details of others people’s lives and stories. Original feelings of wanting to shout out ‘go, girl’ during Baileys wild recounts was swiftly replaced with ‘woah, girl’ as the constant consequences of her poor decision making and ensuing chaos continued repeatedly. However, this shouldn’t cloud the uncensored courage of Bailey’s disclosures and the purging of her teenage experiences.

In tackling many taboo topics, Bailey can be respected for her bravery and honesty. By normalising her countless experiences many necessary talking points are raised and are important for the millennial generation to start opening to. Topics of traumas, fears, family dynamics or sexual desires are hard to voice, but are often liberating. This memoir may be what is needed to encourage others to find their own vocabulary for self-expression.

Whatever was a rocky ride of laughs, gasps, and lots of conversation starters. This book is recommended for readers over the age of 18 and contains topics which may be triggering.