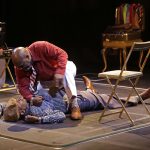 Why do we still struggle to understand civil war in South Africa? How do we fail to link these donga-riddled roads of Makhanda with inequality, townships and extreme wealth, to the simple facts of violence and the rabid dispossession of wealth and life opportunity by the ruling elites?
One answer lies in … well lies and propaganda.
This most evil of aspect of war, ideological distortion, finessing, emotional manipulation – anything, even death, is not ruled out by those vraats who chow down at the trough of the offshore bank accounts while pushing the masses away with the barrel of a gun.
Everyone knows, it will take another social revolution to overthrow this fascism. I pray it will be non-violent.
These thoughts obsess me, my hands gripping the wheel as the car rattles and bumps over the patches and holes of Makhanda, once Grahamstown. I am returning, naturally, from watching the most incredible performance of Zakes Mda’s The Mother of All Eating.
I have been in the presence of a master: Nhlanhla Mkhwanazi, back from surgery in 2017, has taken us deep into the dassie gat of state corruption as the principal secretary of state, trying to chow as much of a road building tender as is possible, while being forced to share out the loot with other ministries and state officials.
The theatre style is township, with bulging expressions, exaggerated characterization, high-energy melodramatic acting. I am left feeling small and enthralled at its brilliance, sophistication and originality.
Mkhwanazi is phenomenal and his fire spreads to Luntu Masiza who is a perfect, deadpan, venal foil to the sweating, anxious, furious crooked secretary of state.
Christopher Weare’s direction is sure, stark and to the point. We are really getting it.
Corruption is a tough business – there is plenty of acid burn when politicians connive to gorge on the taxes and souls of the citizenry.
I am equally amazed and thrilled that this Mda classic, first performed in 1992, is growing in relevance as a deflated SA tries to recover from the voracious vampirism and violence of Zuma’s rightwing ANC.
I am delighted that many in the show were high school pupils for it is up to them to try and fix the volatile mess their parents got them into.
If it tours, make sure to get a seat. It is the food of the gods.