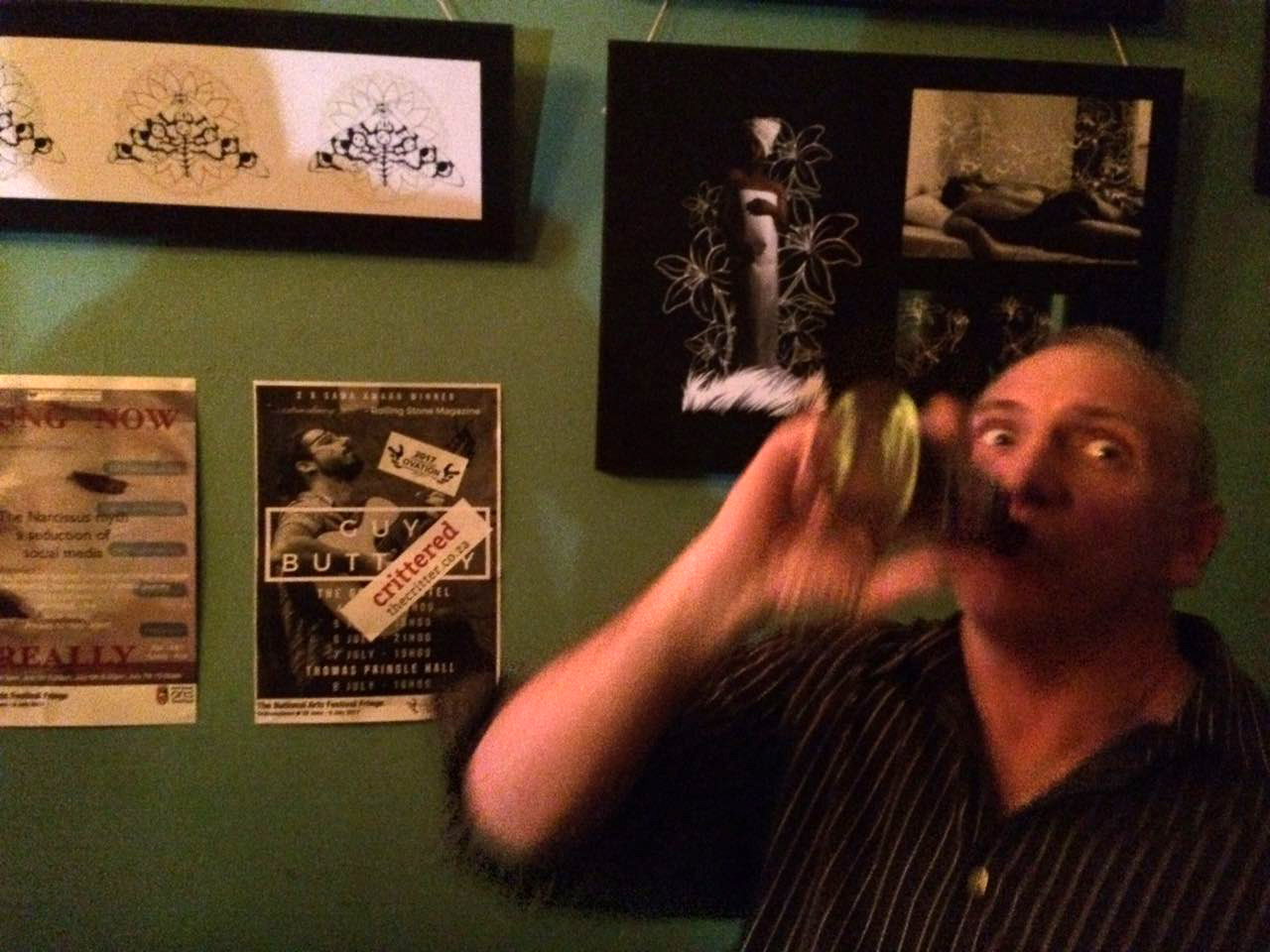 Citation: “Guy, Alas I knew him: once he slaughtered sacred cows, now he is one.” – amended but inspired by Darryl Accone, 2014.

Guy Buttery felt so strongly that we were wrong to criticise his gig at the Standard Bank Jazz Festival because, even though he is trained to play jazz, to wit, “I studied it”, he does not play jazz. Apparently ever.

So, if you were with us in the bleachers at that gig, you were foolish to expect jazz, or any other attempt at referencing jazz. Why should he, he protests: “The Kiffness didn’t play jazz (at their SB Jazz fest gig). And yet, DJ David Scott of The Kiffness, when speaking from that stage, thanked the jazz fest for giving them the opportunity to play our “jazzier stuff”.

What Guy, it turns out, is somewhat alarmingly good at is censorship – he or his minions ran around fest and ferreted out every one of his posters which had the now-world famous sticker “Crittered” plakked on it, and they slapped his 2017 Ovation Award sticker over it. (Dear God, please don’t let anyone read that review, love Guy.)

The Critter recants: Guy Buttery is not good at jazz.

Other Saturday night drunken, etc. Bitchin’ in the Kitchin’ suggestions, which we discounted in the harsh winter light of morning:

Hunter S Thompson Might Be Taking Yourself Too Seriously Floating Trophy, inaugural winner, Guy B.

James Morrison, the Australian international jazz took hundreds of decades to get here, according to Alan Webster. Morrison drew the show down to a few notes. We heard a pin drop. No wait, it was the snap, crackle and pop of a punter ripping open her plastic bag of sweeties. A hour later, way up on liberated Monument hill down though down in the bowels of the B2, in a show with a name some will not pronounce, The K-word, the play reached a silent crescendo and – crunch, munch – there she fucking was, onto and into her second bag! What are the odds?

What’s with all this mom stuff, Ghostdance for one,  I Turned Away and She was Gone, and Newfoundland. All great pieces but one Critter had apply tissues and allergex to control the sobbing, the streaming, the congestion and asthma.

Critter Underground Awards: Sabine, Mie Sithole, Dave Knowles. He is the Aminal. (Dammit, that’s the show’s official spellin’) and electro-theatre violinist Luka Hart. At Luka’s gig, in three rows of olde English long-backed pine-mos chairs sat hipsters, transfixed. They clapped with polite gusto, while at the back local Rasta artists jived, threw dreads, stomped and bellowed for joy, along with a Critter or two.

Critter awards too for glittery horror show KidCasino, Daffi Fall for the simple brilliance of one idea.

Most successful show at fest nobody knew about; Money Maker Reloaded. Every day. Full. Overflowing into the street. Braziers and  chisa nyama at the NGK hall entrance, Vintage Euro clothing over the road doing a roaring trade. The truth is always mixed and matched, hey?

“The shifty year. Disrupted only quietude, and that’s not a play.”

How Many Times Must We Showcase This Show: We are the reason no one comes to your show.

Soli(D)arity, I Turned Away and She was Gone

Human Pieces II, “the fringiest fringe that ever fringed”.

Critter Norman Bates False Apostrophe Pest of the Fest Award for the “Has the fest lost it’s (sic) vibe” Like and share our Facebook page, aka, scrub our pamphlet with lemon juice to find the hidden URL.

Lankfester Pied Piper Award: You are not boring T-Man.

With input from our cultural comrades, those arts guerrillas who fight with pen and keyboard further up the hill. Gratitude.