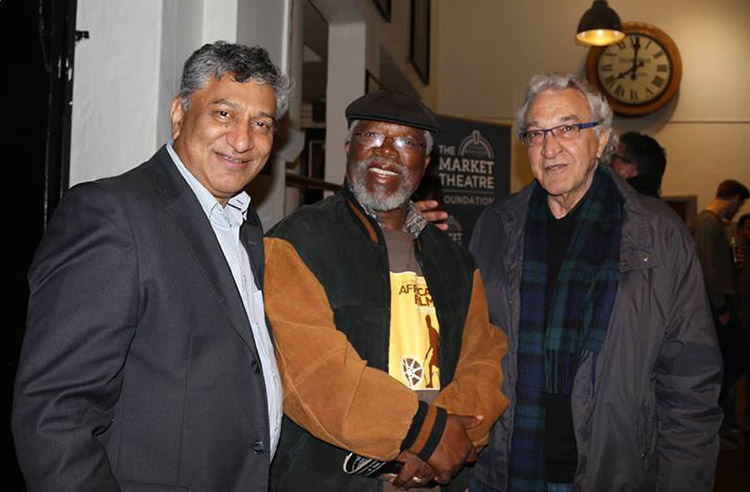 Opening an independent theatre is a risky business at the best of times, and in 1976, prospects for South Africa as a whole, looked grim.

Thus on Monday night I waited among the many people chatting to Market Theatre co-founder Mannie Manim at the end of the Sophie Mgcina Award and inaugural Arts Incubator’s Trade Fair launch on the night of the theatre’s 41st birthday, to find out how he did it.

When I eventually got a gap, I took a risk and asked: “Mannie, what were you thinking?”

Now, despite a slew of awards, including a Naledi Lifetime Achievement Award and the Order of Ikhamanga in Silver from the President, Manim, who co-founded the iconic Market Theatre with the late Barney Simon, remains a warm and personable man; after leaning forward to catch the question, he laughed.

“My best friends were saying ‘you’re out of your mind’,” said Manim

“Newtown was desolate, but I was a very otherwise person, and we went ahead.”

And what he and Barney Simon managed to create, was a multiracial theatre production company that not only played to a multi-racial audience and staged numerous plays critical of the brutal apartheid regime, they did so a stone’s throw from John Vorster Square. Under the very eyes of the notorious security branch that enforced apartheid laws, Manim and Simon went about doing what they could to oppose the state regime.

But one of the most crucial moments of self-doubt came just three days before the theatre’s doors were first opened. It was June 16, 1976.

“We were doing a dress rehearsal of The Seagull (by Chekov)”, said Manim. The celebrated 19th Century play by the Russian writer was chosen as the theatre’s opening performance because it was a classic that would draw an audience.

Dress rehearsals were underway for opening night, said Manim, when “we heard all these helicopters”.

Stepping out of the building onto what was at that time a street along which trucks trundled loaded with animals on the way to the abattoir (“and we were all vegetarians, you could smell the fear from those animals”), Manim and Simon stood on the pavement watching the police choppers flying to Soweto where thousands of school children were marching against the state, and scores of them dying from police bullets.

“Barney and I stood on the pavement saying, ‘what are we doing?’.

“But Barney* had a saying that our dignity is in the work. That is what will carry us.”

To go back into the building and carry on rehearsing while Soweto was burning was a difficult decision, but one that has been validated over time, as the company and theatre Manim and Simon established went on to arguably become an effective weapon against apartheid. The Market Theatre became the home of ‘protest theatre’ and a haven for South Africans of all races who opposed the regime, providing moral and intellectual sustenance to continue the fight.

Surprisingly, the Market Theatre managed to avoid being crushed by the National Party jackboot, but didn’t pass by completely unnoticed by the heavies at John Vorster Square.

The theatre had been running for two years, says Manim, when they decided to stage the musical ‘The Me Nobody Knows’, which is about children asserting themselves and set in an inner city slum.

“Our posters were always very artistic,” says Manim, with the hint that many current production companies might spend a bit more effort on their poster design, but the poster for that show was simply a photograph of the multiracial The Company (which was what the production company was called).

“That set things in motion.

“Two cops arrived. A good cop and a bad cop. They interrogated me for the whole day. The bad cop was shouting ‘what the hell do you think you’re doing?’, the good cop was saying ‘we just want to understand what’s going on.’ And they took all our files.

“A couple of weeks later the good cop phoned – you know I never got his name – and I thought: ‘here we go’.

“He said there is a law under which what you’re doing is legal.

“Apparently, buildings that hadn’t been changed externally – this one still hasn’t been changed – remained as they were (exempt from apartheid legislation). And of course, this was a market, where all races were allowed, no-one had ever thought it would become a theatre.”

“I got hold of Raymond Tucker, our lawyer on the board, and he found a copy of the law and we printed it and kept it in the safe in the box office just in case.

“But there’s more to that story.

“He said there was a city bylaw regarding racial mixing being dependent on zoning, and because the market was in a zone light industrial, well, anything with industrial in it was open to all races.”

But while the state were off their backs, economic pressures didn’t back off so fortunately.

Manim admits there were tough times, times when the view down the road was bleak, so they simply put their heads down and focused on the next production.

“I always said, ‘if this production doesn’t succeed, we’ll do one more’.

“And people would ask, what if that one doesn’t succeed? My answer was always, ‘then we will do one more’.”

Manim said there were corporates who were “wonderfully supportive”, but it was the actors who gave of themselves, “gave their all and believed in the space”. With their support, he knew that even if they had no money at all, the Company could still do one more production. “I knew we could do it because we’d all muck in.”

“There were Friday nights, sitting in a ring on the floor, going ‘this is for you, this is for you… handing out envelopes of money from the box office.”

What eventually boosted the Market Theatre financially, was the flea market that used to fill up the entirety of what is now known as Mary Fitzgerald Square on a Saturday. It was one of the first flea markets in South Africa, and during the ‘80s, was the only place a teenager could find sought-after international brands such as Levi jeans, smuggled over by an entrepreneurial Nigerian. With the trade embargo firmly entrenched and China not yet pouring plastic goods into the rest of the world, the market throbbed and pulsed with culture and enterprise from across Africa.

Masks from the Congo, cloth from Burundi, tyre sandals from Swaziland, banned books and records sold out of crates, artists such as Stephen Cohen selling their graphic creations, the flea market became a pan-African meeting place.

It was started as a way for the Market Theatre’s art gallery to sustain itself.

“You know, artists are very particular. They want the lighting just so and the work hung just so… the art gallery was very expensive. Then Wilf (Wilf Weinek who ran the gallery with Paul Stopford and Michael Goldswain) came up with the idea of a fleamarket.”

With income from the stall rentals, they were “making money hand over fist”.

“Eventually I said to them, ‘you’ve got the richest art gallery and we’ve got the poorest theatre’. So they offered to share the money. They were very generous.

It also tied into the Market Theatre’s ethos, which was multi-cultural, multi-racial and welcomed everyone.

So much so, that for the first few years, the box office was instructed that if anyone walked in and couldn’t afford the full ticket price, they were welcome to pay what they could afford.

“Everyone who came in had to know they could be here.”

For a great interview between Mannie Manim and Vanessa Cooke about the heady early days of the Market Theatre, click here.

*The original post attributed the saying to Mannie Manim, Mannie has graciously corrected us.

0 thoughts on “What were you thinking?: Market Theatre birthday chat with Mannie Manim”