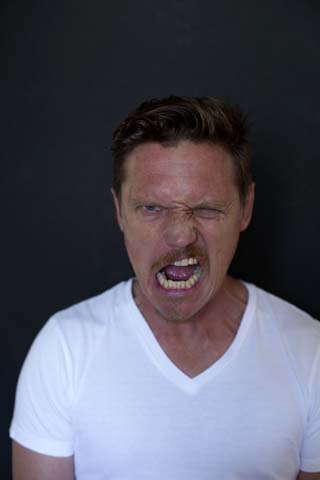 Holy balls, now this is a good play! Deranged, disgusting, perverted, crass and fucking hilarious. Written by the cape’s Lord of the Dark Side himself, Louis Viljoen and performed by Festival sweetheart Rob Van Vuuren, Dangled proves to be the bastard offspring of a match made in hell. And that’s a compliment.

Viljoen has adapted Nikoli Gogol’s short story Diary of a Madman into a masterfully penned and devilishly disturbing comedy-tragedy. All manner of fucks and ball jokes and cum and spit and pus are woven through prose with such ease; the poetry of the mentally insane. One is lured into Viljoen’s trap as we laugh and squeal like piggies thinking we’re watching a dandy old farce, with a few “oh wait, that was a weird, uncomfortable moment” thrown in. This we quickly forget and then it’s back to the smiling like idiots and slapping our knees at Van Vuuren being funny and clever.

And then Viljoen (who is laughing maniacally in my imagination) shoves his hand right up your poephol like the puppet master he is and makes you stop dead. For this is not a funny little play with Twakkie doing tricks for your delight. This is a play about perverts, rape and violence. About delusions and insanity. I wanted to punch Viljoen in the face for making me an accomplice to such nauseating depravity. For making me laugh and then making me watch. And for making me sick with guilt and horror.  All at the same time as wanting to suck Viljoen’s toes in gratitude for being such a fucking good playwright.

The night before I watched Dangled, I watched Rob van Vuuren doing comedy in his The Best of Rob Van Vuuren show. It was good, except for PE. He seemed a bit tired, a bit distracted and a bit off his game. Perhaps it was the dickhead-derp-faces from PE and Boknes in the audience giving him kak. Or it could be that its difficult to do comedy when you know you have to go act in a Viljoen play later. Despite this, Van Vuuren proves again, in my opinion, that he is both  a good comedian and a brilliant actor. He really is beautiful to behold in Dangled. He chews up chunks of Viljoen’s meaty script and spits in the faces of his spell-bound audience with the clarity and precision which comes with being a highly trained, highly experienced actor. His energy never dips. His concentration never fails. He is captivating.

My boyfriend told me after the show: “Sjoe, that was a poephol clencher!” And indeed it was. I had trouble sleeping last night you fuckers. And I enjoyed every disturbing morsel of this disgusting, feted, treat of a play.