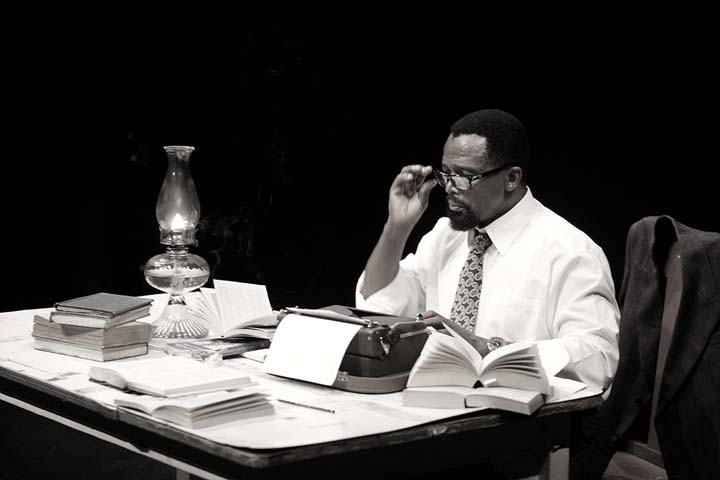 Sello Maake kaNcube has the presence, character and experience to bring Can Themba home for audiences, but perhaps he should take his subject’s advice and put a little firewater in those brandy bottles to loosen up, get rid of nerves and remember his lines.

It felt fitting to celebrate the story of one of Fort Hare University’s most illustrious literary alumni and one of South Africa’s greatest journalists, with a massive script from Siphiwo Mahala.

Themba, an English graduate who struggled relentlessly and hopelessly against the then-Transvaal education department to have his Fort Hare University qualification, a pass with distinction, recognised so that he could get a teaching job, penned some of our finest stories and forged a style of journalism worthy of being revered and practised.

Not so perhaps all the destructive boozing, ghoulish soul-searching and crushing depression which was wreaked upon creative, socially committed writers like Themba. Ironically, he lovingly criticised his colleagues for trying to win white intellectual approval by “wearing a mask”, instead of surging ahead with incendiary stories from the fiery cultural frontline of Sophiatown while barely masking his own descent into despair.

It was a time of blackness being derided and justice denied, but Themba and the Drum school of writers and creatives were raising to the rooftops the phenomenal culture of defiance not seen so much on the picket lines of the Congress movement, but more in the culture, the dance, the jazz, the language, the suits, dresses and those sharp two-tone shoes.

Themba’s philosophy is regaled in the simplest of words for the most powerful of concepts of God, death, love, violence, and hope in this script.

They run from his pen an fill notebooks, and rattle off his fingers onto his manual typewriter in his journalistic battle against the bulldozers tearing into Sophiatown.

There is a shocking scene bereft of words as Themba sits at his desk in his famed humble little room machine-gunning copy onto paper, while outside the apartheid government rips down the very fabric of an entire community.

The story untold perhaps is the number of talks Themba had with Nelson Mandela and Walter Sisulu who asked him to rally his journalism colleagues behind the movement, and received an eloquent, possibly slurred, riposte about the soulessness of politics without humanity.

The script makes the point that Madiba was moved by Themba to shift his political line to accept the role of the individual in a democratic struggle, but Themba, it seems held off from submerging his writing and reporting in bland ideological Africanist terms, choosing rather to uphold, through individual tales, an authentic vibrancy of African people and culture.

Themba was never persuaded to become a propagandist, and cynically and wittily said he would choose alcoholism above becoming a politician.

This is a work which stretches across the epochs. There are many moments where you swear Themba is talking about now, not then.

Despite opening jitters, the piece should find rhythym and will be a triumph for theatre, Fort Hare and African journalism.

The House of Truth, commissioned by the National Arts Festival to celebrate the University of Fort Hare’s centenary, shows at The Hangar today (Saturday June 2) 1pm, and tomorrow (Sunday July 3)at 7pm. Programme notes and bookings here.